The Salvation Army Women’s Auxiliary for the Martin, St. Lucie and Okeechobee Corps in Florida is celebrating a major fundraising milestone.  Since its founding 20 years ago, it has raised more than $1 million for the Salvation Army’s local programs and services.

The auxiliary formed in 2000 when Mary Helen Keim invited a few neighbors to her home for coffee to discuss something near and dear to her heart – The Salvation Army. At her northern home in Indianapolis, she had already founded a thriving women’s auxiliary for the Army that contributed to the development of a rehabilitation center. She felt the need to found a second auxiliary in Florida.

“Mary Helen was very convincing that this is the best organization in the world,” said Mimi Boulden of that first meeting. Boulden is the last active charter member of the auxiliary that soon formed. “I think we all felt that we had done a lot for charities (up north), and we got down here and didn’t do anything and when she confronted us, she made us realize our thinking was bad.”

Keim and her friends immediately began making plans for a fundraiser and pushed for the development of a new local program – a shelter for homeless women and children. The auxiliary hosted its first Wings of Hope Luncheon, now an annual event, and endeavored to spread awareness of the plight of the homeless in the area.

“We decided that there was a great need for a shelter for homeless women and children, and we worked hard to make it happen,” Boulden said. Compassion House opened in 2012 and to date has sheltered more than 450 women and children, offering them resources for employment and stable housing.

In addition to Compassion House, the women’s auxiliary over the past 20 years has helped The Salvation Army purchase a 15-passenger van, a 28-passenger bus, a new sign and a change-counter for the red kettle season. They have helped send hundreds of children to summer camp, purchased new clothes for thousands of children in the Angel Tree Christmas Assistance program, helped start a children’s music program and purchased backpacks and school supplies to be donated to hundreds of children. Total appropriations to the Army recently surpassed the $1 million mark.

Local staff are thrilled to have the auxiliary’s ongoing support to help those in need. “The impact that The Salvation Army has been able to have in the lives of countless men, women and children in these three counties is due in large part to the devoted efforts of this fabulous group of ladies,” said Lieutenant Sheena Marquis, corps officer.

Mary Helen Keim passed away in November, 10 days shy of her 103rd birthday. In her memory, the local corps has created a new award to be presented every year to pay tribute to an outstanding women’s auxiliary member. “Mary Helen leaves behind an incredible legacy that we hope to honor by continuing to “do the most good” with the help of our women’s auxiliary,” said Lieutenant Marquis.

Today the Salvation Army Women’s Auxiliary for the Martin, St. Lucie and Okeechobee Corps boasts 58 members and continues to support Compassion House and the Army’s many other programs through fundraising and volunteering.

Washington ARC men reach out to help their corps 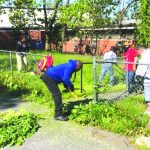