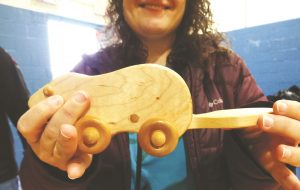 A desire to use a love of woodworking to do good for their community turned into a 28-year labor of love for hobbyists who devote hundreds of hours every fall, turning out hundreds of hand-crafted wooden toys for families served by The Salvation Army in Charleston, West Virginia.

“When our club was formed in 1991, we had members who wanted to do something for the community …. so we decided to make toys for The Salvation Army to give to needy kids,” said Andy Sheets, vice president of the toy committee of the Valley Woodworkers of West Virginia, based in Dunbar.

The group, with 60 to 70 members, has a clubhouse that’s a fully equipped wood shop with table saws, band saws, a drill press, joiner and planer. Like Santa’s workshop, it’s the place volunteers meet to create toys to be given to children at the Angel Tree distribution of Christmas gifts in December. The doll cradle makers, for example, split up into two crews. One crew works Wednesdays, the other, Thursdays, over 2 1/2 months to produce 200 to 300 cradles.

“Everybody understands the need for kids to have toys,” Sheets said. “We make toys age-appropriate for children maybe 3 to 10 years old – toy cars, toy beavers with articulating tails, doll cradles and alphabet blocks. The youngest kids get the blocks, the girls, if they ask for a doll, get a cradle, and so on.”

The community gives generous support. Every year, local residents give nearly 4,000 board feet of hardwood – ash, maple, hickory and poplar. Columbia Forest Products donates nearly $700 worth of half-inch plywood. Toyota Motor Manufacturing, with a plant in Buffalo, West Virginia, gives $2,000 to $2,500 cash to cover what isn’t donated, such as hardware.

In an era of electronic gizmos and gadgets, a simple wooden creation – like a beaver whose tail moves – is a different kind of delight for youngsters, said Kristi Frank, director of development for The Salvation Army’s Charleston Command.

At the Angel Tree distribution, Frank said, parents come to the gymnasium of The Salvation Army Boys & Girls Club of Charleston to pick up the presents they signed up for. As they leave, they’re asked the age of their youngsters and what kind of wooden toy they’d like; one toy is given per child.

This year’s drive in Charleston benefited 789 children – for the first time ever, every child was sponsored, as every angel was taken and returned – as well as 75 senior angels.

“Kids get all these amazing high-tech things now, but the woodworkers create these beautiful gifts that don’t require batteries or plug-ins,” Frank said. “It’s just a wonderful organization, to do it all for free and put in all that time. It gives kids a different level of toys, things they wouldn’t get otherwise.”

Sheets said, “We do what we can; we make what we can. We don’t usually have hard and fast goals because we’re a volunteer group, and we understand our members have lives of their own – wives, children, personal projects. But typically, the number of toys we produce usually falls between 600 and 800.”

No business like show business at the Memphis Kroc Center 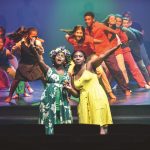 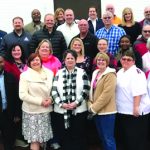