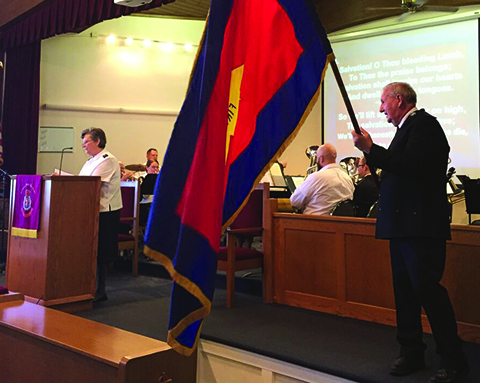 The Waco, Texas, Corps recently celebrated its 125th anniversary by hosting a homecoming weekend under the theme “Rally ‘Round The Banner.”  Majors Bradley and Anita Caldwell were joined by former Waco corps officers for the weekend, including Major Tim and Cheryl Gilliam of Fort Lauderdale, Florida, Majors Russell and Tracey Czajkowski of San Antonio, Texas, and Lt. Colonels Henry and Dorris Gonzalez, retired officers and former Texas divisional leaders.

Celebrations began on Friday evening with a Booth revival meeting that featured a time of “Singing Around the Banner,” testimonies and a devotional presented by Major Tom Overton. On Saturday evening it was the turn of the young people to participate at the youth revival during which Major Cheryl Gilliam delivered the message, “So You Want to be a Hero?”

Every seat was filled in the chapel on Sunday morning as corps members both past and present attended the 125th anniversary services. “His Banner Over Me Is Love” was the theme for the meeting. Music was provided by the Waco Corps Band, joined by the Texas Divisional Music Department staff. Praise and worship time was led by Major Tom Overton, and Major Cheryl Gilliam sang a vocal solo, “Search Me.” Major Tim Gilliam spoke on the subject “He’s the Same – Yesterday, Tomorrow and Today,” challenging the congregation to build on the foundation and victories of the past and to take the mission and ministry of The Salvation Army forward for the next 125 years and beyond. Memories of the corps from over the years were presented by Major Linda Wheeler and Major Sue Overton, who both grew up in Waco.

The weekend concluded with a concert and praise meeting on Sunday afternoon. In addition to musical selections from the corps band led by Bandmaster Janet Harrison, the program included participation by the youth chorus, the divisional music department and the Munoz family. Captain Richard New, former assistant corps officer in Waco, presented a challenging devotional thought, before the weekend came to a close with the stirring congregational song, “Marching On.” 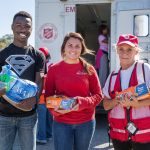