Volunteers pitch in, give Atlanta Boys & Girls Club a top-to-bottom makeover on MLK Day of Service

“It was awesome,” is how Joshua T. Dickerson describes 350 volunteers turning out on Martin Luther King Jr. Day, Jan. 15, to tackle a laundry list of service projects at The Salvation Army Bellwood Boys & Girls Club in northwest Atlanta, Georgia.

“We added mulch to our playground, renovated the learning center, reorganized the computer lab, painted and redecorated the swimming pool area and gave a complete makeover to the art room,” said Dickerson, executive director of the club.

“What you are doing today … will impact the families who live in the community and our children who have come here for a safe haven for so many years,” Bottoms said. “This really is what today is all about. It’s about partnership, it’s about fellowship, and it’s about reaching young people and giving to someone else, someone in need.”

The Martin Luther King Jr. Service Day was the Bellwood club’s first, Dickerson said. Volunteers started checking in at 8 a.m., had a pep rally and orientation at 9 a.m., and worked from 9:30 a.m. on, with a one-hour break for lunch. Aside from a little touching up, all the tasks were completed that day.

Dickerson said he hopes to do it again next year, possibly at one of Army’s other area clubs. The Salvation Army operates three Boys & Girls Clubs in metro Atlanta: Bellwood, at 777 Donald Lee Holowell Parkway NW in the Bankhead neighborhood; Fuqua, at 405 Lovejoy St. NW in Midtown; and Peachcrest (which also houses a corps), at 3500 Sherrydale Lane in Decatur.

“We had people of various races, backgrounds and genders all come together to work for the common good,” Dickerson said. “It tied in perfectly with The Salvation Army’s mission of Doing the Most Good.” 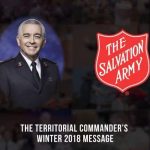 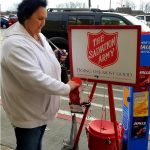 DipJars offer donors the option to give by credit card at Red Kettle locations...
Scroll to top