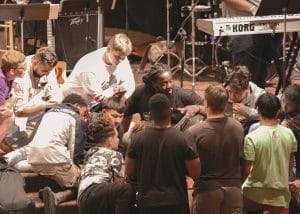 Four hundred people from across the South gathered at Camp Walter Johnson in North Carolina July 28-Aug. 3 for the 2018 edition of Territorial Youth Institute. And instead of trying to cram as much as possible into the seven-day meeting, they hit “Pause.”

Research shows TYI’s target audience of 15- to-25-year-olds “report the highest levels of stress and anxiety of any living generation,” said Captain Sarah Nelson, associate territorial youth secretary for The Salvation Army. “They carry a lot of pressure, not because they don’t have enough options and choices, but because they have too many.”

“Pause is intentional, to give an interruption so they can assess where they are, perceive real versus self-created pressures and make good decisions,” Captain Nelson said. For example, at the end of each day, “we give delegates time for personal devotions – we call it, ‘Hit Pause.’

“In the past, we’d gather after Bible study for discussion groups; this year, we call them ‘FaceTime’ groups. By that we mean actual face time – not relying on devices to communicate, but actual, face-to-face conversations.”

Teaching at “Morning Manna” and evening programs accompanied elective classes and fun activities like a cardboard boat race on Camp Walter Johnson Lake, a “Celebrate Your Colors” dress-up event recognizing diverse heritages, and a day trip to the Carowinds amusement park outside Charlotte.

Thursday night, on a serious note, small bands retreated into the woods – miserable and dripping wet after days of torrential rains – for “Secret Church.” Like persecuted believers around the world, delegates gathered in the dark to hear a Christian “radio” message produced by the Soundcast team.

At one Morning Manna, Steve Carter, former lead teaching pastor at Willow Creek Community Church near Chicago, told attendees, “Your quiet time – I call it ‘chair time,’ when I just open up God’s word – is critical. It’s in those moments you get to build not just a religion with God, but a relationship. You let him have access to you.”

Carter told of once agreeing to run a 5K race with friends in San Diego but by mistake running a half-marathon of 13.1 miles instead.

“One of the biggest fears I have is I stand before God and he’s going to say not ‘Well done, good and faithful servant,’ but, ‘You ran the wrong race,’” Carter said. “I don’t know about you, but I don’t think you can run the right race if you don’t have moments where you just pause.”

Commissioner Willis Howell, speaking at Friday morning worship, said, “You have experienced this week the stillness and awareness of the presence of God. You hit pause in a positive way. But I can’t help but wonder: Gang, are you hitting pause in a less than wonderful way?”

Commissioner Howell cited Jesus advising the rich young ruler to sell everything he had and give the money to the poor. The young man went away sad.

Like that individual, the territorial commander said, “Do we not TYI after TYI, Sunday after Sunday, youth councils after youth councils, say in effect, ‘Oh Jesus, I would do anything for love – but not that. Definitely not that. No, I won’t do that, either.’ That’s when the pause button is not our friend.”

“Consider all that Jesus has done in your life; look who he has surrounded you with, look at the incredible blessings you have. Think of how much he loves you. He took your death penalty. How do you live for him in return? How will you respond when he says, ‘Listen, you tell me that you love me. Out of love, will you do this for me?’” 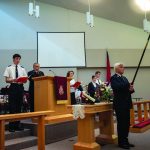