To Battle We Go: Marching Songs

Every U.S. military service has its marching songs, some unique to that service, some universal to all the services. Most of us are familiar with the stirring official songs of the various services, and these are often sung on the march. But the military has dozens of marching songs covering all aspects of military life, from getting up early to leaving civilian life behind, from recounting military triumphs of past to dealing with the fear and anxiety of combat and death, and all designed to keep the unit in step and marching forward.

These songs are considered so important in inculcating the culture and espirit de corps of our military services that the teaching and singing of them begins on the very first day of basic training, led by drill sergeants specially trained to “sing cadence”. And they teach them very well. I can still sing many of these songs verbatim today, over forty years after my boot camp experience.

Many of the songs are humorous and have more mundane and practical uses, like keeping in step or relieving boredom on a long march.  But some of them are powerfully meaningful and motivating. To site just one example, the proudest and most emotional moment in any Marine’s career occurs near the end of boot camp when, having endured a kind of grueling final exam called “The Crucible”, and thereby having “earned the title” of United States Marine,  he or she is allowed for the first time to sing the entire Marines’ Hymn. Even the roughest and toughest new Marines cry like babies.

The Salvation Army, unique among denominations and Christian movements, also has its marching songs, which we call War Songs. A section of our songbook is still dedicated to these songs, and there was a time when they were sung weekly in every corps. These songs contain the culture and spirit of the Army and have been powerfully meaningful and motivating for generations of Salvationists around the world.

Yes, we share many great hymns of the church with other denominations, and they help unite us with believers the world over. But we Salvationists have a unique role within the church, and our songs should reflect that. Unfortunately, the demise of the Sunday night Salvation Meeting has meant that an entire generation of Salvationists has grown up without knowing and singing these distinctive songs.

Some may say that the militarism of songs like “Ever Is The War Cry”, “Storm The Forts Of Darkness” and “Am I A Soldier Of The Cross?” is out of step with modern culture. But it wasn’t the Salvation Army that put a military flavor into Christianity, but the apostle Paul (among many other biblical writers), who often refers to his co-workers as “fellow soldiers” and who tells us to “put on the full armor of God” and to “endure hardship with us like a good soldier of Christ Jesus.”

Or is it that marching songs don’t make sense for an army that isn’t on the march much nowadays, literally or figuratively? No, The Salvation Army should always be marching to the sound of the guns, meaning toward the spiritual combat zone. And for that we need our marching songs. Sound the battle cry! 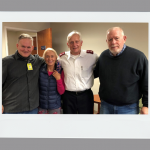 An unexpected and miraculous ministry opportunity in Atlanta
Scroll to top