To Battle We Go: Every Salvationist must be a marksman

The United States Marine Corps prides itself on the combat effectiveness of the individual Marine rifleman, and this begins in recruit training with a serious commitment to marksmanship training. Marine Corps training is longer, at 13 weeks, than that of any other military service. Recruits spend two full weeks at the firing range. It’s expensive and time consuming, but it pays off on the battlefield.

To further refine their marksmanship and other combat skills after recruit training, every new Marine goes directly to a School of Infantry for another 30 days of training. Because the Marine Corps considers basic combat skills its top priority, all this basic combat training is completed before Marines attend training for their military occupational specialty, the actual job they will perform in the Marine Corps.

Not only does every new Marine know how to shoot well, but all Marines, from cook to commandant, must maintain their marksmanship certification by requalifying at the firing range every year. The Marine Corps has many different jobs, some highly specialized and requiring many years of training and experience, but no matter what their job, title or rank, every Marine must be able to shoot. Thus, the slogan, “Every Marine A Rifleman.” We in The Salvation Army are involved in many different ministries, and we fill many different roles as soldiers, local officers, officers and ministry employees. Some of these roles are highly specialized and require years of training and experience and may seem somewhat removed from street level Salvation Army ministry. But every Salvationist must be willing and able to effectively proclaim the gospel of Jesus Christ at all times and in all settings.

For Salvationists, this begins with a serious commitment to discipleship, especially with our young people. Our Junior Soldier and Corps Cadet programs are the Army’s equivalent to Marine Corps recruit training, where our young people learn the basics of Christianity and how to proclaim the gospel to a lost world. Any adults in our corps who may have missed out on this kind of early training need to be brought up to speed in an intentional way. Every Salvationist must be able to shoot!

For those who have had the training, it’s a matter of constantly “requalifying at the firing range,” keeping their experience with the Lord current and their skills in witnessing about their faith sharp. For different people in different settings, this will mean sharpening different evangelism skills. Some are working with children, some with adults, some with social service clients, some with a staff of employees or officers, so one size will not fit all. But let’s all be able to confidently say “Every Salvationist An Evangelist!” 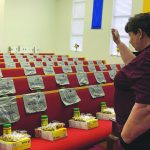