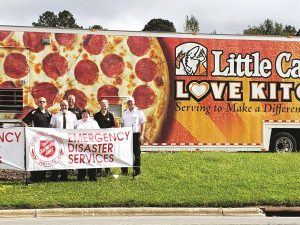 It is often said that necessity is the mother of invention, and perhaps nowhere is that drop of wisdom truer than at the scene of a major disaster. The need for teamwork and collaboration is critical along the coastline in North and South Carolina, where residents continue to recover and rebuild their lives after widespread flooding caused by Hurricane Florence’s relentless rains.

The Salvation Army’s Emergency Disaster Service units have faced numerous challenges in this massive relief effort. In attempting to meet those challenges, the Army has employed assets it has never used in previous operations and forged partnerships to help it meet needs more effectively and on a larger scale.

One of the new assets for Army disaster units has been the GPS tracking system, which has been invaluable in getting mobile relief units positioned effectively – particularly with widespread flooding across the coastal Carolinas that has cut off many communities and left many roads submerged. The GPS system was implemented earlier this year; Florence is the first event at which it has been utilized.

Emotional and spiritual care for disaster survivors has received increasing emphasis in recent years, and in the Florence operation, that aspect of outreach has been reinforced by new role-players – dogs. The Army has partnered with Therapy Dogs International to provide comfort and make connections with survivors. Jeff Jellets, territorial disaster coordinator, said the therapy dogs are quickly becoming the two most popular disaster workers in the Wilmington, North Carolina, area.

In a cooperative effort with New Hanover county officials, The Salvation Army opened a disaster distribution center alongside Wilmington’s multi-agency assistance center. Disaster survivors can apply for help from a number of government and non-government agencies at the assistance center and then visit The Salvation Army’s adjacent distribution center to receive items such as food boxes, cleanup kits, infant care items, and water. “What’s great about this set-up is that some of the programs in the assistance center are restricted to New Hanover county residents. But anyone can receive help from The Salvation Army and we are seeing disaster survivors from all over the region.” Jellets said. “At one point, we served over a thousand cars a day.”

Food services have long been a staple of Salvation Army disaster outreach. The Army has long-standing associations with organizations such as the Midwest Food Bank and Southern Baptist Food Relief; those are ongoing, but a new partnership has formed with Operation BBQ Relief, a nonprofit group based in Kansas City that provides food in disaster relief efforts. The group formed in 2011 after a tornado devastated Joplin, Missouri.

“This is the first time we’ve deployed in conjunction with them,” Jellets said. “They’ve hit their 2 million mark in meals served in this disaster. We started working with them a few years ago after flooding in Shreveport, Louisiana, and we’ve been growing our partnership with them ever since.”

Little Caesars Love Kitchens serve pizza at disaster sites. In Wilmington, a Love Kitchen deployed in the parking lot at the New Hanover County Government Center, where the emergency operations center had set up. Army relief workers teamed up with Little Caesars to serve more than 300 meals and drinks to county personnel.

Also, Jellets said AmeriCorps volunteers have been of critical help in assembling and distributing Salvation Army cleanup kits in the Wilmington area.

“In every disaster, there’s always opportunity for partnership,” Jellets said. “Now we’re seeing more interest than ever from corporations and organizations – not just in offering support but getting involved in a deeper way. We can’t do it alone. We have to really look at these key partnerships and strengthen them and value them.”

On Oct. 4, House Majority Whip Steve Scalise of Louisiana and Congressman David Rouzer of North Carolina visited a multi-agency relief effort in Wilmington to observe recovery efforts and discuss how Congress can help.

On Oct. 3, Salvation Army disaster personnel offered food, drinks and emotional and spiritual care after a shooter in a residential area opened fire, killing one and wounding six. 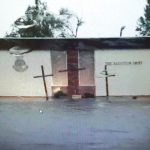 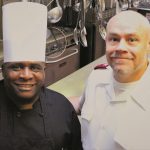