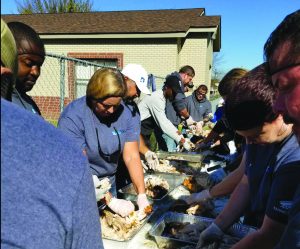 The Salvation Army and its partners serve turkey to 15,000 in Fayetteville, N.C.

Across the globe, many Salvation Army units provide valuable feeding programs to their communities, and in the United States, Thanksgiving is perhaps the most visible day for that initiative. The year 2018 was no different on a grand scale, but in Fayetteville, North Carolina, the Army’s work saw a big uptick in volume, thanks to a partnership with Operation Turkey.

Majors Tim and Cheryl Grider are responsible for the five-county area surrounding Fayetteville. In the past, their ministry has included feeding on Thanksgiving. However, the 2018 partnership with Operation Turkey – one that also included partners Publix and Second Harvest Food Bank – grew to a level never seen before by the Griders, anywhere.

“We’ve been able to serve like this in other appointments, but never to this magnitude or degree,” Major Tim Grider said. “The numbers alone were kind of staggering. … We were able to use our facility and resources in a way to serve that volume of people, and the entire operation, including all of the volunteer help, was really impressive to me.”

In the past, the corps served 500 to 600 meals on Thanksgiving. With the new partnership, expectations for 2018 were initially in the 1,000 to 2,000 range. Then, as the event neared, the goal grew to 10,000. In the end, Fayetteville served more than 15,000 meals, with a massive volunteer force that included more than 600 individuals over a three-day period.

Though the origin of the alliance with Operation Turkey largely grew from the avoidance of service duplication, the result was a thorough program for meal delivery across a five-county region, as well as the ability for individuals to eat at the shelter in Fayetteville.

Much of the food was donated by sponsors and partners like Operation Turkey, while the Army provided a no-cost option to house the effort. The partners worked together to reduce repetition while meeting the needs of the community.

In addition to the simple act of service, The Salvation Army plans to expand its association with Operation Turkey to other holidays and occasions, including Christmas. Also, volunteers at the Thanksgiving event have a new appreciation of the Army’s work.

“We were able to speak to the volunteers before all the work started,” said Rhonda Merritt-Quador, director of community relations and development at the Fayetteville Corps. “We explained that, if wanting to help was appealing to them, we needed them to come back and help us. That is already happening.”

“It’s been an amazing opportunity for us to work with partners and people we never had previously. People believe they have a good idea of what we do, but this gave us visibility to show people what we do, both for Thanksgiving and year-round, and that visibility came while serving the community.” 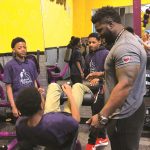 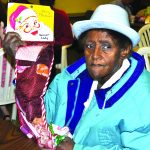