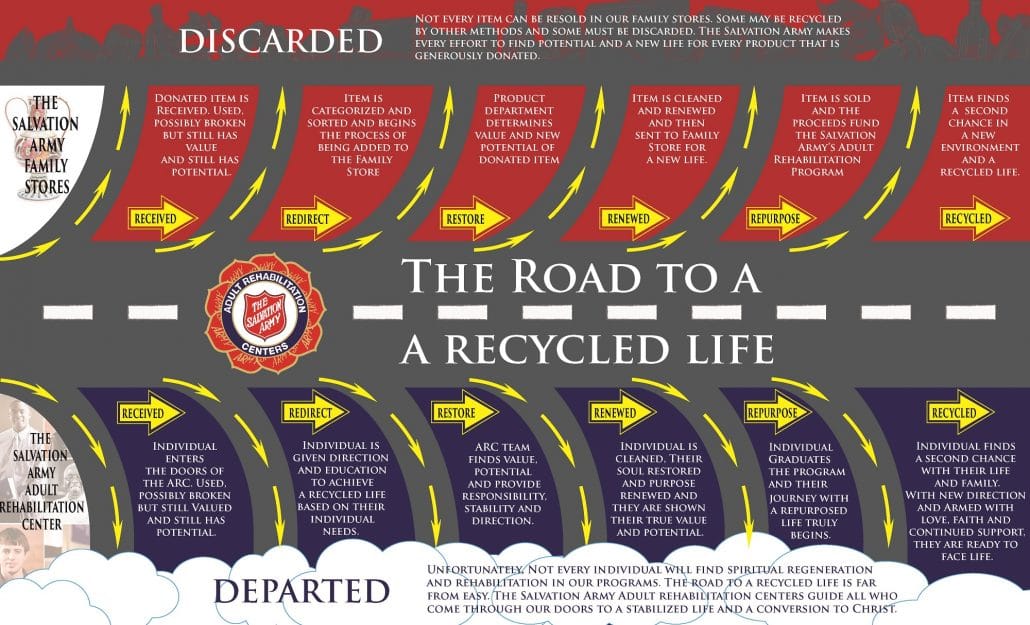 The Road to a recycled life

This chart shows the parallels between the progress of a donation, and the progress of a human beneficiary, through the Adult Rehabilitation Centers Command. Both have worth, yet both also face testing and trials along the way. Add to the human side the critical importance of perseverance.

“The chart is to show The Salvation Army is making a concerted effort to come alongside a man or woman to assist them to full recovery,” said Major Liz Wilson, secretary for program for the Adult Rehabilitation Centers Command. “They just have to surrender and be willing to let God work in their life. We’re going to make the tools available to help them have a healthy and productive life.”

The chart is an illustration. The Adult Rehabilitation Center at 740 Marietta St. NW in Atlanta, Georgia – like the 22 other ARCs across the Southern Territory – is the real thing.

The Atlanta ARC has four Family Stores to stock. The stocking typically begins with a donor’s phone call to 1-800-SATRUCK (pick-ups also can be arranged online at SATruck.org). An Atlanta ARC operator asks questions from a script on a computer screen.

If it’s a couch or mattress, does it have stains, rips or tears? If an exercise bicycle, is it working? If a refrigerator, does it run or have any rust or odors? The screening helps determine if a donation can be accepted. (Clothes will be taken in any condition.)

“An item has to be in ‘gently used’ condition,” said Major Michael W. Vincent, Atlanta ARC administrator. “We try to not accept anything that will cause an expense to us by going into the trash.”

A dispatcher schedules the day’s pickups for the ARC’s 14-truck fleet. Each truck has two men: The driver is an employee, and the helper is an ARC beneficiary. They hit the road by 8 a.m. weekdays, range out as far as 50 miles, make 20 stops and return to the warehouse between 3 and 4 p.m.

Clothes go to a big room where they’re sorted using the “Howell System,” named for Colonel Ray Howell, the Eastern Territory commander who devised it.

“One of the ARC men will set the bag of clothes on a sorting table, open the bag and step aside,” Major Vincent said. The sorter quickly goes through the pile. Store-worthy apparel are tossed into one of several 32-gallon drums marked with prices: 99 cents, $1.99, $2.99 and so forth – “so she’s not only sorted it, but priced it at the same time.”

“We try to price all of our product to where it moves very quickly throughout our Family Stores,” Major Vincent said. “That serves two purposes: It gets shoppers interested and keeps them coming back.”

A full barrel is slid over to a hanging table, where another worker hangs clothes on a rack.

“Our goal for every person who is a hanger is at least 1,000 garments in an eight-hour shift,” Major Vincent said. “The overall goal for this warehouse – every ARC operation is different – is to process 10,500 garments a day, Monday through Friday.”

The ARC also gets furniture: bedroom and dining room sets, couches, chairs and the like. Bric-a-brac like pots and pans, books, small appliances, porcelain figurines and lamps are sorted, cleaned and put on display shelves in the store. High-value items like digital cameras, home electronics and video games go to a special room where they’re photographed for sale online by the eBay sales team.

“If something does not sell in our store, it will sell in an auction” – for example, Major Vincent said, an appliance repairman comes by regularly, buys eight or 10 refrigerators, stoves or dishwashers at a time, and fixes them up for resale – “and if not in an auction, to a bulk buyer.”

Clothes unsold after three weeks are taken off the racks, put in a big green baling machine, pressed into bales and sold in 42,000-pound lots to a textile buyer who ships them overseas. Unsold shoes go out the door by tractor-trailer load for so many cents a pound.

A used mattress in good condition will be sanitized and put on the showroom floor. But if it’s stained, it will be sold to a mattress rebuilder, who will strip it down to its core, rebuild it and sell it back to the ARC. “We have the best prices in town for rebuilt mattresses,” Major Vincent said.

The intake process for the ARC’s human product, the major said, “is a term everybody in The Salvation Army is familiar with: ‘Soup, Soap and Salvation.’ When a man comes into a center, often that man has been very hard pressed, many times from the decisions he’s made. He doesn’t come here because everything’s going right. He comes here because his life is literally turned upside down.”

An individual may walk in on his own or be referred to the ARC by family, a social service agency, the courts or, often, a Salvation Army corps. Who knows the last time he had a decent meal, a restful night’s sleep without fear of being robbed, or a hot shower and a clean bed?

“You have to be mentally and physically able to be here. You have to have the willingness to be here,” Major Vincent said. An entrant also must be 21 to 65 years old and have a government-issued ID, like a driver’s license, and a Social Security card so his identity can be confirmed.

“We believe in second chances, and third chances, and fourths and fifths,” Major Vincent said. “As someone said, if we err, let’s err on the side of grace.”

“When a man first comes to the center, he’s welcomed, he’s embraced, he’s prayed for. He starts his day with a tremendous meal and tremendous fellowship with other men. He gets not only clean clothes for the day but a whole locker full of nice shirts, pants, sock, shoes – even a suit to wear on Sunday. All of that is provided at no cost whatsoever. So when you think of the soup and the soap, that’s providing for him starting on Day One.”

That said, there are rules to comply with, such as on-time attendance at classes to help the 180-day rehabilitation process. The individual learns “a new way of thinking about life that has nothing to do with drinking, drugs, gambling, pornography or a host of many things where he’s lost his way.”

And a beneficiary must participate in work therapy – going out as a driver’s helper, unloading trucks on the dock, sorting clothes, cleaning bric-a-brac, serving as a store clerk or sweeping the floor.

Major Wilson said, “Work therapy is the tool that is used to get a man or woman back into a daily structure. For example, you and I know we have to set our alarm clocks to start our day and get ready to come into the office. Oftentimes, with an addiction, an individual loses those basic habits. We’re trying to help them get them back.”

Major Wilson said she’s sometimes asked the ARC’s success rate. “Success is the fact an individual came to our front door and asked for help,” she said. “We jump for joy when that happens. One individual once said to me after one week in the center, ‘This is the longest I’ve ever been clean.’” 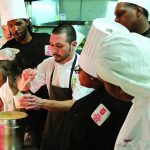 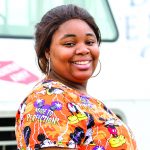