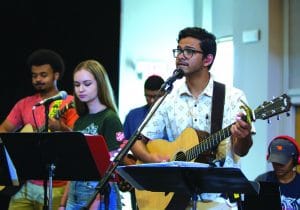 For nine days, more than 300 delegates and staff at the Territorial Music Institute convened at Texas’ Camp Hoblitzelle July 22-30 with the focus of living in harmony with one another through music and the arts. Based on Romans 12:18, TMI’s thematic message was clear: In addition to high-end instruction in various disciplines, the overarching focus was to improve and stabilize the spiritual lives of all in attendance.

On several occasions during the week-plus, the entire group gathered and, on opening night, an old-fashioned “Salvation meeting” was the scene. Amid rousing musical tunes, there were poignant moments. Justin Bowman of the Arkansas-Oklahoma Division was highlighted for publicly accepting his calling to become a Salvation Army officer, while special guests William and Linda Himes, Kellyn Thornburg, Matthew Woods and Rich Swingle were introduced to the delegates.

Still, the centerpiece of the evening was a message and charge from Lt. Colonel William Mockabee, territorial program secretary.

As with any edition of TMI, the sheer volume of disciplines covered was awe-inspiring, ranging from traditional brass and vocal focuses to tracks on dance and drama pedagogy and contemporary praise and worship.

Twice a day, delegates gathered with instructors to focus on their “major” disciplines, with two additional periods designated for either chorus or continued leadership instruction for those in advanced tracks.

There was time for pleasure, though, and the entire camp made its way to Arlington for a Texas Rangers baseball game. TMI’s lead band performed the national anthem at the start. The ensemble, named for Dr. Richard Holz, retired territorial music secretary, was rousingly supported by the rest of the delegation.

During the week, two designated performances are arranged for the groups that have been diligently rehearsing. The first, deemed as “preview night,” arrives mid-week with the express purpose of preparing all for the set of dual final concerts on the concluding Sunday. The event included inspiring work from the bands and choruses and a piece titled “Work of Art” that featured delegates from across the creative arts spectrum gathering together on stage.

Selected delegates shined during the institute’s Solo Night, with professional-level works performed with vigor. Not to be outdone in the spirit of TMI was the annual delegate-staff softball game, which ended with the instructors emerging as the victors.

Following a time of worship through music in Sunday’s “Morning Manna,” Linda Himes provided a challenging, yet touching, message as she had throughout the week and delegates and staff alike responded with renewed commitments to Jesus Christ.

“This is what we’re about,” said Nick Simmons-Smith, territorial music secretary. “Sometimes as musicians and artists, we become passive observers … I want this experience for you. I promise you the blessings you’ll receive are beyond imagination if you simply follow Jesus and accept him as your Savior… Our Salvation Army needs you. Our country needs you. Our world needs you to be shining lights in our community.”

Performances from Sunday’s final concert were captivating, headlined by the Holz Band performing “Ultrachrome,” written by special guest, William Himes, O.F. In addition, the TMI Chorus blessed with “The Mind of Christ” and there was a clear and present celebration of both the talent and spiritual focus of the young people involved.

In conclusion, Commissioner Willis Howell spoke eloquently about the focus on harmony during the final worship service, using pitch frequency to demonstrate the disharmony that can creep into lives when departing the safe space of a Salvation Army institute. In fitting fashion, the territorial commander used a musical illustration for a greater purpose and, in doing so, drove home the predominant message of the week that, as The Salvation Army, music and art should be used to promote the mission of winning souls for Christ. 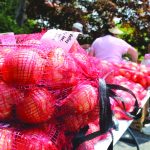 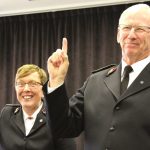