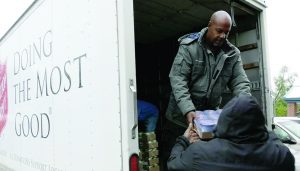 One of the biggest fund-raising events of the year didn’t happen this fall in Bowling Green, Kentucky. Because of the United Auto Workers strike against General Motors at the time, the Bowling Green Assembly Corvette Club had to cancel its September charity car show.

Nonetheless, several show sponsors insisted that the club – an organization of car enthusiasts founded by auto workers in Bowling Green, home of the Corvette assembly plant since 1981 – keep the money and put it to a good cause. One of those good causes is The Salvation Army Bowling Green Corps; the club has supported its food pantry every year for the last 13 years.

“Our sponsors, we went back to them and said, ‘Hey, we are not having a car show this year.’ They instantly said go ahead, use the money, do what you do and we’re good with it,’” Dave Chrisley, a club co-founder and member of The Salvation Army advisory board, told the Bowling Green Daily News. Thanks to Holley Performance Products of Bowling Green; Bill and Mo Harris of Acworth, Georgia; Gay Robinson of North Carolina; and Kroger, which made food products available to the Corvette Club at cost, the Bowling Green Corps this year received four pallet loads of canned goods worth $4,050.

“Normally we get lots of vegetables like corn and green beans, and dry goods like cereal,” Captain Cox said. While all that’s fine, he said, “we’re trying to encourage people to give protein as well. It’s good for the body, especially at this time of year, when you need something to help produce body heat. It rounds out the diet and helps make sure people get a full meal.”

Chrisley said, “Getting hold of protein is sometimes a little more difficult, so that’s where we try to fill the gap.”

The canned goods will go into food boxes distributed to needy families on Mondays and Fridays. One box will feed a family of five for a week. In 2018, the Bowling Green Corps delivered 1,923 food boxes and served 67,191 meals at its soup kitchen. It is expected to surpass those numbers this year.

“The Corvette community is a very giving community,” Chrisley said. “We love our cars, but we’ve also been very blessed, so we like to give back as much as we can.”

Staying in touch: Hernandez keeping ties with The Salvation Army as he serves... 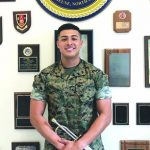 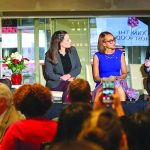