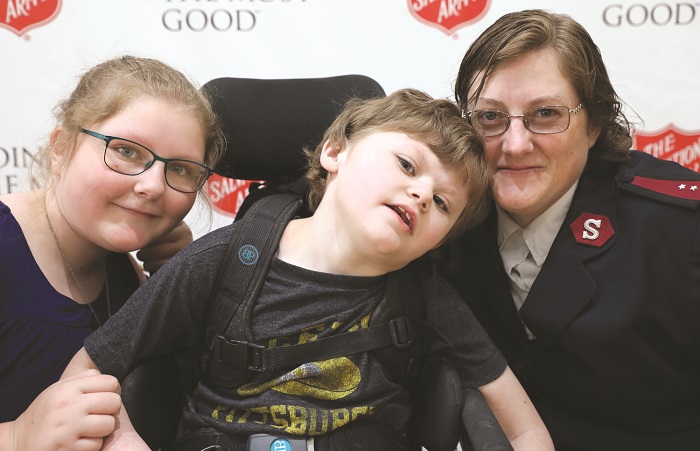 Sebastian Boatman is a lucky 9-year-old boy – he is surrounded by love. Discount the fact that Sebastian was born with Congenital L1CAM—a rare disease that affects only one in 30,000 boys (girls are even more unlikely) – he is a happy kid who is tenderly and carefully watched over by his mom, Captain Lauren Boatman, and big sister Alexis (12).

“I went for a routine ultrasound at five months of my pregnancy,” Captain Boatman said. “The ultrasound showed that my son has a condition called hydrocephalus.”  In addition to mental and physical deficits, a major organ somewhere in the body is likely compromised. In Sebastian’s case, it is his colon.

This has not been an easy decade for Sebastian’s mom. Serving as a single parent-officer in The Salvation Army is tough enough, but one would think raising a medically-fragile child would be extraordinarily hard.

So how does she do it? How does she fulfill her dual obligations as a mother of two, one of whom needs constant care – and faithfully man her post as a corps officer in Alabaster, Alabama?

Turns out, she has three distinct advantages that makes her dual role bearable, if not easier than most in this situation.

First, her faith is strong. She is bolstered by “God moments,” like when Sebastian rolled over for the first time. “These moments remind me that God is in control and everything will be O.K.,” she said.

Second, “and this may sound corny,” she said, “but practically speaking, a strict daily routine is important. For instance, on the first day of each month, Sebastian’s mom reviews his therapy and doctor appointments for the coming weeks. It is important that each day presents a predicable system of doing things: Sebastian’s exercises; his daily schooltime at a special-needs facility; his bedtime, etc.

“The third coping mechanism we have really depends on where I’m serving as a corps officer.” With every move The Salvation Army appoints her little family, it takes a few weeks for the adjustments to kick in. New doctors must be located. Routines adjusted. And the corps people in each of the captain’s appointments have really been loving and helpful.

Sebastian’s mom considers these modifications as being equal to learning the new appointment itself.

As a single-parent officer, Captain Lauren reminds herself that she is never alone. Besides the obvious faith-driven assurance of God’s direction in their lives, she said that notes of encouragement, support from her DHQ; going to the local driving range to hit a bucket of golf balls; and an occasional “girls night out,” goes a long way.

With more than 14 years so far of service as a Salvation Army officer, two-thirds have been done performing this dual role of pastor and a mom to a medically fragile child.

But she would not change that for anything. And neither would Sebastian. 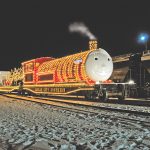 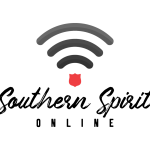