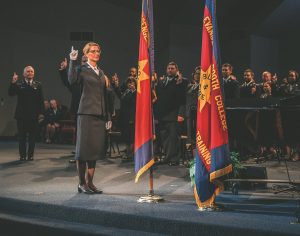 South greets Messengers of the Kingdom

Each year, a new session of cadets gathers at Evangeline Booth College to begin two years of intensive study and training for officership and the newest group, Messengers of the Kingdom, was formally welcomed in early September. In fitting fashion, the words above were sung by the assembled congregation, bringing to memory the journeys experienced by each of the 27 members of the session prior to arrival in Atlanta to begin fulfilling their calling.

The evening began in rousing fashion as the newest cadets entered the sanctuary of the Atlanta Temple Corps with a march like theme, introduced by name while grouped by division. Moments later, the congregation gathered to sing “We’ve a Story to Tell” and, in addition to the clear theme of the stories brought forth by each member of the session, Commissioner Barbara Howell reflected on that thesis.

Later, the event pressed the pause button with something of a surprise, as Commissioner Willis Howell introduced the first-ever assistant territorial sergeant major. The individual chosen for the position, Jeremy Rowland of the Lawrenceville, Georgia, Corps, was installed in support of the current infrastructure and alongside Territorial Sergeant Major John Reeves.

Though the night centered on the new cadets, the spotlight on the soldiery was not out of place.

From there, Territorial Sergeant Major Reeves provided a challenge to the Messengers of the Gospel that was followed by the presentation of the session flag. The flag was presented in a touching way and, in addition to words from Major Tom Louden, principal of the Evangeline Booth College, Commissioner Howell reflected on the flag and what it means.

“So a flag, in its elemental form, is just a stick and its material,” Commissioner Howell said. “But how does a stick and cloth hold so much power? It’s because it’s a symbol. Symbols hold what we value. Symbols represent what we revere. The Salvation Army flag is far more than the sum of its parts.”

After an inspiring testimony from Cadet Scott Fagan and the vocal performance of the session song, Colonel Ralph Bukiewicz, chief secretary, delivered the message. His words were uniting, reminding the new session and those in attendance that “You and I together are messengers, but it’s not the messenger that is as important as the message.”

In closing, Colonel Bukiewicz focused on the central Scripture of the evening, taken from 1 Timothy 4, and the message translation placed a suitable point on the proceedings.

“I can’t impress this on you too strongly,” Colonel Bukiewicz read. “God is looking over your shoulder. Christ himself is the judge, with the final say on everyone, living and dead. He is about to break into the open with his rule, so proclaim the message with intensity; keep on your watch. Challenge, warn and urge your people. Don’t ever quit. Just keep it simple.” 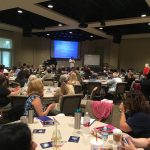