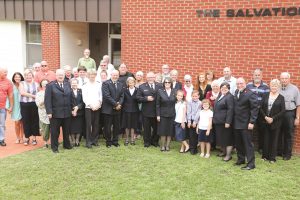 Nearly one year to the day following the rude arrival of Hurricane Florence in mid-September 2018, the New Bern, North Carolina, corps family celebrated their return to the historic house of worship at the corner of Queen and Craven Streets. As a result of the hurricane, the Neuse River surged over two feet throughout downtown New Bern, causing extensive damage to the corps building.

Sunday worship services and other corps programs had to be held elsewhere in the interim.

Lt. Colonels Jim and Linda Arrowood, North-South Carolina divisional leaders, were special guests for the Return Celebration during the holiness meeting, which was live streamed over the internet.

Lt. Colonel Jim Arrowood lauded the New Bern soldiers for their resiliency and perseverance, not only to minister to others who had lost so much in the flood, but for their own losses – both personal and as a corps.

“It’s great to be back in this chapel, but these walls do not define us,” the colonel proclaimed in his sermon, “The Body of Christ Is Community.” “Rather, our mission as The Salvation Army remains outside these walls – to a community who remains helpless and hopeless without Jesus Christ!”

Lt. Colonel Arrowood described the position of the New Bern Corps as “unique,” adding, “You were not only responders in the hurricane’s wake, but you were victims yourselves!”

God has brought about healing through your experience, he added, but the work in New Bern is not finished. The divisional commander said that the Army continues to fight for hearts and lives and against injustices all around us. The work is not finished—we are fighting for people’s lives.

“God will continue to use your experience to share with others that in this, too, God is faithful.”

Major Frank Duracher, former writer for The War Cry and the Southern Spirit, is a retired Salvation Army officer living in North Carolina.

National Commander gets a look at Southern operations in Atlanta 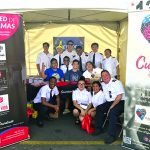