Every spring, the “Flip Flop Drop” of Savannah, Georgia, helps the community – one shower at a time – by raising funds to provide clean footgear to homeless shelter clients of The Salvation Army. It’s an effort started by teens and run by teens.

A $1 donation buys one pair of flip-flops. This year, 12 young people and their local business partners raised enough money to purchase more than 2,000 pairs of flip-flops. They were delivered to the Army on May 11.

“The way they responded and the faces we get, it’s just really welcoming, and it’s rewarding in itself,” Brendan Mahoney, of Benedictine Military School, told a local TV station, WTOC Channel 11.

“You make yourself happy, and you make these other people happy, and it makes you feel good that you’re donating for a good cause,” said Wynn Ambos of STEM Academy.

Savannah teens started the Flip Flop Drop four years ago to provide footwear and ensure clean, hygienic shower conditions for the area’s homeless. More than 12,000 flip flops have been handed out at homeless shelters and community facilities throughout the area. 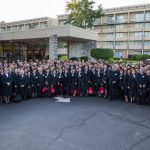 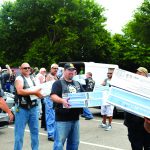