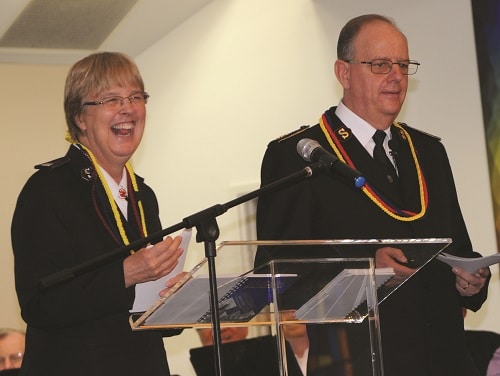 The reunion included all elements of the theme “Marching On” was organized and directed by Commissioners Willard and Marie Evans.

The yellow, red and blue of the Army were present and prominent throughout the St. Petersburg Corps building as about 400 delegates gathered for the reunion.

The Adult Rehabilitation Centers Command and the centers in Jacksonville, Orlando, St. Petersburg and Tampa, with the coordination of Majors Bill and Mary Madison, hosted a gigantic welcome barbecue under a double big top tent as their part in saluting and celebrating the retired officers of SAROA.

Serving as the drum major, the redoubtable Commissioner Raymond Cooper led a grand “Sound Off” celebration, and it was clear that SAROA’s 85 years of mission and ministry was going to be revisited, respected and revered and that retired officers would be challenged to stay in touch with The Salvation Army’s mission and ministry.

Throughout the three days of celebration the “Marching On” theme was beautifully executed in the four plenary sessions with the subthemes, “Sound Off,” “Cadence,” “On Parade,” “Forward March” and “Onward Christian Soldiers.”

On Friday during lunch the four USA territories and the Canada and Bermuda Territory enjoyed smaller gatherings of fellowship, food and reunion.

The SAROA reunion was the first ever attended by an active General of The Salvation Army. The General and Commissioner Sylvia Cox entered completely into the “old-time Army” spirit of the meetings and gave those attending a clear look at the Army of today and tomorrow.
Their messages from God’s Word included a practical and pragmatic depiction of the issues, challenges and opportunities facing the Army in the 21st century in a world as diverse, separated and at odds with itself as any time in history.

The messages from both the General and Commissioner Cox were full of hope, optimism, encouragement and reality. The General spoke with authority and passion about the international initiatives of spiritual and missional renewal and called on all in attendance to support those efforts with our own commitment.

The music of SAROA Brass was featured prominently during the reunion. The group, formed more than 30 years ago under the leadership of Commissioner W.R.H. Goodier, has an ongoing ministry during the fall and winter throughout Florida.

The importance and spiritual impact of brass music in the Army was presented in the form of witnesses called “Man and Horn.” These four, prominent evangelist Rev. Vincent Cervera; bandmaster and National Advisory Board member William Flinn; music educator Dr. Tom Walker; and St. Petersburg bandmaster and high school music director Nathan Farrell; shared their walk of faith and ministry as examples of the truth of “If you teach a boy to blow a horn, he isn’t likely to blow a safe.”

The annual dinner theater, always a hit with Saroans, was presented by Tom and Marsha Walker, who were accompanied by Ken Kehner.

Commissioners Jeffrey and Commissioners Bell, as well as Lt. Colonels William and Debra Mockabee, Lt. Colonels Gary and Suzanne Haupt and Captains Chris and Heidi Farrell participated throughout the three days of celebration and worship. 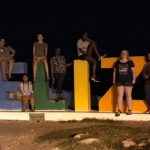 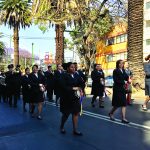