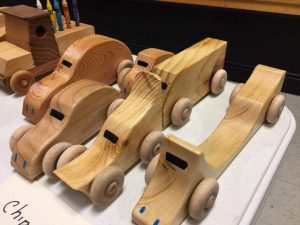 Like Santa’s elves, Chip Miller of the Kyana Woodcrafters Association has been busy this fall in his workshop, shaping and sanding upwards of 300 wooden toys for the children of Angel Tree families of The Salvation Army’s Louisville, Kentucky, Metropolitan Area Command.

Kyana members in northern Kentucky and southern Indiana produce an average of 1,000 toys every Christmas for Angel Tree. They’ve been at it for more than 25 years because “there’s a general feeling of trust and respect for the work The Salvation Army does,” said Miller, a former president of the organization.

The woodcrafters have about 100 members, “and at least 50 percent of our guys do toys,” he said. “Those who don’t, we shame into giving money, though many do both.” Kyana also raised a cash donation of about $500 last year for the Army.

Every toy is hand-made. Miller prefers to use pine, finishing them in non-toxic shellac. Others use walnut, oak and cherry – often, whatever scraps and odd lengths they have around their shops. The club buys the wheels that go on many of the toys and distributes them free to its toymakers.

“We’ve got some simple patterns we crank out every year,” Miller said. “I make all kinds of cars. Most of the toys are boys-type things, but we’ve got some guys making doll beds for the girls.

“We have cars, trucks, animals – your typical pull toys. One guy turned out some tops last year. Another member who died did puzzles. He’d glue really neat pictures of trucks and farm equipment on thin plywood and cut them out like a puzzle.”

The Woodcrafters get together on the first Thursday of the month, and this year’s toys were taken up at the Dec. 7 meeting. The toy collection is a festive, annual tradition with refreshments, attended by members, spouses and children and grandchildren.

“Everybody who does toys says something about why they did a particular toy,” Miller said.

David Yarmuth, director of community relations for the Louisville Command, also attends and brings a Salvation Army officer, Miller said. “It’s a busy time, but it’s always nice to meet them, to see a top commander say thank you.”

For Yarmuth, this is his sixth year representing The Salvation Army.

“I’m always amazed at how beautifully crafted these toys look and how wonderful their creators are,” he said. “We’re very blessed to have such a generous group of men and women support the children of Angel Tree and The Salvation Army.”

Christmas at the Virginia Peninsula Corps 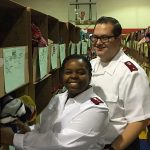 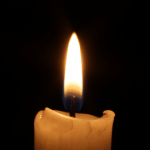