Joe Hillmann came to know The Salvation Army at Ground Zero 9/11.  He was an environmental consultant for Verizon.  While he was at ground zero he saw firsthand the work that The Salvation Army was doing.  For those three months, he was a recipient of many meals provided by The Salvation Army.  Those meals are something that would stick in his mind for many years.

When widespread flooding submerged much of southern Louisiana, damaging an estimated 146,000 homes in August, the tragedy captured Hillmann’s attention. He was compelled to get involved to help however he could in what is being called the worst natural disaster in the U.S. since Hurricane Sandy in 2012 and offered his services as a volunteer for The Salvation Army.

“I was fed by The Salvation Army for three months and I never forgot that,” Hillmann said. “I always said if there was a time and way I could serve with The Salvation Army I would.  I had many options to serve here in Baton Rouge with many different organizations, and I remembered The Salvation Army, so I came to volunteer for a day.  I ended up running the car line.”

Joe was instrumental in getting the car distribution lines, where people are able to drive through and get the supplies they need, up and running smoothly.  On some days, more than 1,000 have gone through the line, receiving food (both non-perishable and some perishable like hams), cleaning supplies, hygiene products, and other supplies that were available at the time.

The magnitude of Hillmann’s sacrifice hits home when you find out that he is from New Orleans, having moved there after Hurricane Katrina, where he served as an environmental consultant.  He took a week off of work to lend a hand in Baton Rouge and paid for his own hotel and meals while serving the community.

He said that the courage he has seen displayed by the people of Baton Rouge has touched him. “It’s a little sad at times as people drive through the car line to get supplies and they’re living in their cars.  Everything they own is piled up in the car, but they are appreciative to be able to get things from this line.”

As of Aug. 30, Salvation Army relief personnel had served over 134.000 meals, 164,000 drinks, 55,000 snacks and 14,000 food boxes. More than 8,000 cleanup kits and 13,000 comfort kits have also been distributed. The Army’s Emergency Disaster Services operation deployed 24 canteens to serve in affected areas throughout southern Louisiana. 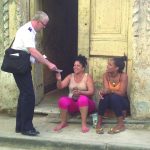 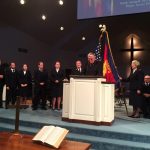