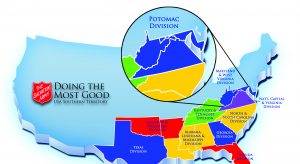 Since its birth in 1927, the USA Southern Territory has been subdivided in a variety of configurations. The divisional makeup of
the territory has been static since 1983, but it now has a new division. Commissioner Willis Howell announced on Nov. 1 the creation of the Potomac Division, which will combine the present Maryland-West Virginia and National Capital-Virginia divisions.

The MWV and NCV divisions are being consolidated in order to provide stronger leadership, more efficient management and more effective support and resources to the field. The consolidation is expected to reduce administrative operating costs, help in the remission of current debt and increase support for ongoing service and ministry.

“The focus of this realignment is primarily related to divisional headquarters, not so much the corps,” said Commissioner Howell in the announcement video. “At the corps level, we’re counting on you to keep doing what God has placed you there to do.”

Preparations for the consolidation will take place over the coming months, with completion of the process targeted for October 2020. The new divisional headquarters will be located in the Greater Washington, D.C., area with a projected staff of 14 officers and 78 employees.

It is the first divisional reorganization in the territory since the adjustment in divisional lines of the MWV and NCV divisions 1983. Prior to 1971, Virginia had been paired in a division with Southern West Virginia, and the Army’s operation in the National Capital area had stood alone as a division. The Potomac Division will be the third largest (in number of corps) in the USA South, following Texas and North-South Carolina.

The Salvation Army engaged a professional consulting firm to offer guidance, research and analyze data and recommend a strategy for the future. The study took place over a 15-month period, and when the decision was made to seek consolidation, the plan was proposed to International Headquarters in September and approved. Officers, soldiers and employees of both divisions were involved in the study.

Several alternatives to consolidation of MWV and NCV were weighed, including maintaining the status quo, strengthening MWV and redistributing corps and other facilities across the two divisions. However, it was determined that consolidation would create the most efficient and effective approach for supporting the field, carrying out the mission and providing financial stability.

“We believe there are many great opportunities for growth of the Army’s ministry, and the consolidation of the divisions will help us to achieve it,” Lt. Colonel Mark Israel said. “In some communities, we need to take different approaches to ministry. Baltimore and Washington are both unique metropolitan areas with cultural diversity in contrast to parts of rural Virginia and West Virginia. The focus of a united division will help us to be effective in meeting the various needs of each community.”

Major Art Penhale, who commanded MWV from 2015 to 2018, said he was struck by the challenges the division faced in terms of not only finance, but also personnel numbers and support capability at the headquarters level.

“We had an inability to respond adequately to the needs of the field,” he said. “We could be doing a real disservice to the field because of that inability. We had to ask ourselves if we were doing the best we could, not so much at the corps level, but from DHQ to the corps. Consolidation will allow the Army to be much more effective in providing services to the field while sustaining itself financially.” 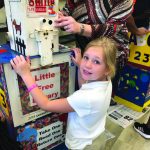 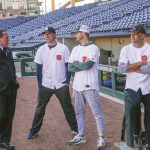