Mobilizing for Action in 2017

The New Year begins with a new Salvation Army initiative: “Whole World Mobilizing.” As Lt. Colonels William and Debra Mockabee see it, it’s a way to get everyone out of the comfort of their corps and into the world to share the gospel.
“We become so internal,” said Lt. Colonel William Mockabee, program secretary for the Southern Territory. “We have events, commissionings, all these things we do for ourselves. I’m not being critical of that – that’s part of the what the Program Department does – but we also need … to become external. We need to be missional.”
Whole World Mobilizing represents the third phase of the Boundless initiative, following Whole Word Praying and Whole World Reading. The vision statement says: “General André Cox dreams of an Army where every officer, soldier, adherent, employee, youth and child is actively mobilizing: To spread the good news of the gospel; to reach out in practical ways; to minister to the needs of our communities; to daily put our faith into action.”
“You don’t have to do it in a group,” said Lt. Colonel Debra Mockabee, assistant territorial program secretary. “You can do this on your own – walking to your neighbor’s, just getting out of your house and sharing Jesus with the people around you.”
The campaign has six movements: integrating endeavors and resources on a dedicated website; motivating Salvationists around the world; cultivating skills and strategies; activating Salvationists to get involved; celebrating the work of God in the lives of individuals and the Army; and dedicating ourselves to the continued expansion of the Kingdom of God.

Lt. Colonel William Mockabee said, “We’ve read the last chapter of the book. We know Christ wins. We need to take that message of hope to people – not only to tell them about it, but to show them.”
A Ministry Tool Kit is posted online at: http://bit.ly/2hiv8YE. Resources here range from pledge cards and door hangars for Adult Ministries, to guidelines for community engagement for the Women’s Department, to a plan for a Mobilizing Motorcycle Ride for the Men’s Department. And that last event is where a special flag from International Headquarters plays a part.
It’s the Blood and Fire, but with the words “Southern Territory” and “Whole World Mobilizing” imprinted on it. It’s to be passed from one division to the next on the Motorcycle Ride, ending at Territorial Headquarters in Atlanta where it will be formally accepted. “We’ll be tracking how many steps and miles people carry the flag when they go into the community,” Lt. Colonel Debra Mockabee said.
The Whole World Mobilizing timeline calls for “Go Launch!” events in January; a “Go Children and Youth Celebration Weekend” March 24-26; and a “Go Forward Dedication Weekend,” the climax of the campaign, Oct. 6-8.
“We’ve become so big and so settled, maybe this is what we need,” said Lt. Colonel William Mockabee. “Maybe this is the breath of revival, maybe this is the spirit of God that inspired our general to get the Army around the world out of our citadels and out into a world that needs us. … and to make sure we do that under the banner of The Salvation Army and what it stands for: the blood of the Christ, the purity of God and the fire of the Holy Spirit.” 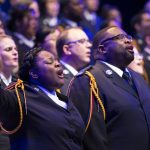 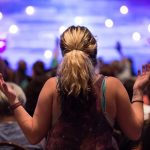 We Will Conference Set to Return in 2018
Scroll to top