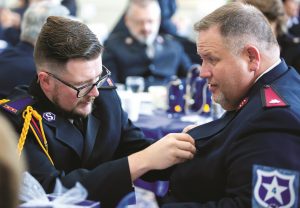 Messengers of the Gospel express gratitude to their parents, mentors

Moments after the Commencement service and their graduation from Evangeline Booth College, the Messengers of the Gospel honored those close to them during the Fellowship of the Silver Star Luncheon. With an overwhelming sense of gratitude, dozens of parents and spiritual mentors were honored and recognized Friday, June 1, for their efforts in aiding the development of the cadets.

Nearly 1,300 individuals from around the Southern Territory are members of the Fellowship of the Silver Star. Created by General Evangeline Booth in 1930, the fellowship’s impact goes well beyond the Southern Territory. It has a worldwide presence and honors those who have made the most significant imprint on the lives of cadets through the values instilled in them.

“Even though I’m amazed (at your attendance), I’m definitely not surprised … because you’ve been there the whole time,” said Cadet Austin Sturdivant, designated to provide a tribute to those in attendance. “I just want you to know that words, plaques, letters and pins cannot express the gratitude we have for you.”

The Cadets’ Contemporary Ensemble blessed those in attendance with two musical selections in “Somebody’s Praying (I Can Feel It)” and “The Lord Bless You and Keep You,” leaving the room echoing with the sense of the Holy Spirit, even until the closing moments. In addition, a video-taped tribute from Criselda DeLeon, mother of Cadet Crystal Porter, provided a touching moment and even a bit of a surprise, as it was revealed that DeLeon recently became a Salvation Army soldier and preserved that moment to share with Cadet Porter in this setting.

In addition to the gratitude and thanks expressed, cadets were encouraged to look forward, and they accepted that challenge, citing the example set forth by those in the room that served as mentors and standard bearers.

“We are asking you to continue to push us and be our shining examples,” Cadet Sturdivant said. “When we arrive at our corps in a few weeks and we think of the things you have taught us and the things we have learned, please help us to remember this. We aren’t called by men. We have been called to serve the Lord.”

Messengers of the Gospel sent to proclaim the blessed news 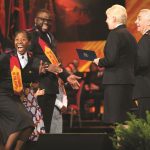 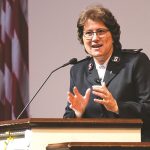 Messengers of the Gospel encouraged to surrender their all to the Lord at C...
Scroll to top