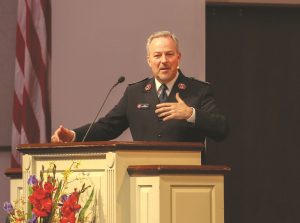 Messengers of Compassion challenged to strive for knowledge, wisdom

Midway through the Commencement of the Messengers of Compassion, Colonel Ralph Bukiewicz said, “We get to brag on God today. We get to look around and say, ‘Look at what God has done,’ … and we get to look at the opportunities that now lay open as a result.” But the chief secretary, the commencement speaker in the May 31 service at Atlanta Temple Corps, acknowledged that academic training, valuable though it may be, is not an end in itself.

“We know that applied knowledge is the doorway to wisdom,” he said. He told the cadets that in the years to come, they would have ample opportunity to apply the knowledge they have acquired and, in the process, gain wisdom. Wisdom would be theirs not because they have been educated but as a result of their own effort and determination to apply what they have learned.

He urged the 18 Messengers of Compassion to be steadfast in their focus on the roles they have been called on to play in the building of God’s Kingdom.

“It’s important that we not get distracted by how the world would look at those degrees and that academic achievement but that we keep our eyes fixed on how it fits within that purpose that God has called all of us to.”

Colonel Bukiewicz challenged them to show the compassion reflected in their session name. “People won’t care how much you know until they know how much you care,” he said. “It’s now the equipping through the knowledge that’s been gained that allows you to expand that care and compassion.”

Cadet Lara Sassano, the session speaker, called on her session mates to fulfill their calling as they set out to claim their appointments. “The world needs a shepherd, the world needs compassion and the world needs us,” she said. “Messengers, may we be the hands, the feet and the eyes of Christ to a world that so desperately needs it.”

The service included the presentation of degrees to the Messengers of Compassion as well as recognizing officers who have attained degrees over the past year through the School for Continuing Education. Also recognized were officers and staff who have completed learning programs in the Jack McDowell School for Leadership Development. 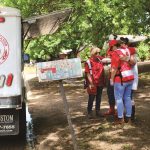