Keith Johnson takes the hard lessons he learned as a street gang member, the way Jesus Christ turned his life around, and his experiences as a successful martial artist and coach, and brings a message of admonition and encouragement to children at The Salvation Army Boys & Girls Clubs in Atlanta, Georgia.

“Helping kids – this is who I am,” said Johnson, a retired customer services representative for Delta Air Lines. “I have been blessed directly by God to do this, because of the experiences I had.”

Doug Cozart, planned giving director for the Georgia Division, first met Johnson in 2019 when the retiree asked about including The Salvation Army in his will.

“He was involved in gangs in Chicago,” Cozart said. “He did some bad things, but he has a very strong turnaround story. It has to do with Jesus, of course, and The Salvation Army also was a big part of his life.”

Cozart invited Johnson to tour the three Boys & Girls Clubs operated by the Metropolitan Atlanta Area Command. There, Johnson gave his anti-gang testimonial to some of the children.

“He’s very motivational, very encouraging,” Cozart said. “He has a very commanding presence, and the kids respect him. As a former martial artist, he still works out regularly. He’s taught martial arts to kids and has that coaching, mentoring mindset. He really wants them to stay straight.”

As a child, Johnson spent his formative years in a public housing project on the West Side of Chicago. Life was tough on the streets, but he also has fond memories of The Salvation Army corps in his neighborhood.

“They were always out there in their long coats and instruments, and they’d be playing,” Johnson said. “I remember the red kettles, and the bells – that distinctive sound you don’t hear anywhere else in the city at night – and that shield … things that would put me back in touch with how I was brought up.”

Johnson’s father wasn’t around, and his mother tried to raise her two boys in a Christian household. She sent them to The Salvation Army for church.

“Every year, they gave a Christmas dinner – I never will forget, turkey and dressing and all that,” said Johnson. “They called each (projects) building out. … We’d show up and see all our neighbors, and they had these long tables with fresh linens and candles.

“I remember going into a big auditorium; there’d be a Christmas tree and Santa Claus. They’d call our names, and we’d each get a gift.”

Yet as Johnson grew older, the streets began to take over.

“We stepped into a wolf pack, and I decided I’d be the wolf leading the pack,” he said. “I grew up fighting to protect my younger brother, fighting to not be bullied, fighting when somebody called me a name. You think, that’s just life. I didn’t realize everybody didn’t live that way.”

Johnson was 12 when his family left the projects, but by then the gang lifestyle had taken hold of him. When he was about 15, he ran away to live with the Vice Lords.

Johnson said it was Satan’s scheme.

“I tell kids the first thing the enemy will do is get you to believe (your elders) don’t know what they’re talking about,” Johnson said. “You want to recognize when this starts happening to you. These thoughts aren’t just coming to you. That’s the enemy grooming you to put you in the position I was.”

At age 16, Johnson was in juvenile detention.

“I took a deal, and they locked me up,” Johnson said.

Johnson’s stepfather decided to get the family out of Chicago. The parents convinced a juvenile court judge to let their son go with them.

They moved to Detroit, Michigan, and started attending a church where Johnson’s stepfather was a deacon. Johnson went back to school, got his GED, married, and had two sons. He looked like a man who had gotten his life together. But his past haunted him.

“I never did sleep well,” said Johnson. “I had nightmares. I had some issues in my life – personal, marital, everything was going down. … I was still carrying the weight of the past in my heart and in my mind because of what I had done and witnessed. Today, they’d call it Post Traumatic Stress Syndrome. Then, I just knew I was troubled. I felt I was at the end of my rope.”

One day, he confessed it all to his mother. “My mother was crying and said, ‘You need to get on your knees and pray to God.’”

“I remember getting on my knees, and I said to God, ‘I’m going to give this just one chance,’” Johnson said. “’If you are who they say you are, help me through this. I don’t know how I need to be helped, but I just don’t want to live anymore.’”

The next day, things started to change. He was invited to a nondenominational church – a church with a diversity of people, led by a minister who drove an old station wagon and had two kids and was opening a used goods store to raise money to feed people.

“He could preach, and he preached me out of myself,” Johnson said. “I broke down one day. I remember tears just bursting down my face. And the brothers came and got around me and hugged me and told me if you accept Jesus Christ as Lord and Savior, you’ll be saved. And I did.”

Soon afterward, he passed a martial arts school on the way to church. He still had this urge for excitement and for testing himself. So he joined.

“That martial arts school gave me competition, discipline and structure,” Johnson said. “I loved it. I embraced it. It was a two-hour class. I slept better. I was saved. Then I became an assistant instructor.”

Johnson went on to earn a black belt in karate and win national titles. Meanwhile, he had gotten a ramp job with Delta and, when the carrier started a hub in Cincinnati, he moved to the Ohio city to help open it. He also set up his own martial arts academy, based on Christian principles, in a church. He had a gift for working with young people, and many went on to win championships themselves.

In 2019, having retired from Delta, Johnson moved to warmer climate – Winder, Georgia, about 50 miles northeast of Atlanta. He started drafting his will, and that led him back to The Salvation Army.

Today, Johnson lives to tell his story to children.

“In late November,” Cozart said, “he called me and said he wanted to do something special for a few of the kids. So we took four kids from the Boys & Girls Club to a Walmart, buying them Christmas presents.”

“I tell them I shot people,” Johnson said. “I was a gang banger. I did a lot of bad things. The Salvation Army was one of the things that got me my humanity back.” 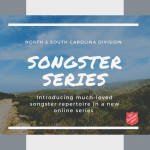 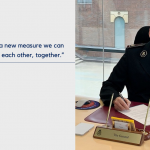