Every year around the time of the Super Bowl, the Johnson City, Tennessee, Salvation Army hosts its annual Souper Bowl for the Hungry. At this event, the Army brings in a former NFL coach and/or player for a luncheon with local businesspeople.

Souper Bowl for the Hungry is an annual event to raise money for the Johnson City Salvation Army feeding programs, which include a kitchen, pantry and mobile program for rural residents. NFL legends come speak and sign autographs at the luncheon.

The Souper Bowl is the second-biggest fundraiser of the year for the corps, trailing only the Red Kettle campaign. This year, the event is Feb. 17.

Speaking will be Dan Reeves, a former Dallas Cowboys player/coach and Denver Broncos, New York Giants and Atlanta Falcons coach. A nine-time Super Bowler as both player and coach, Reeves is tied with Bill Belichick for the most individual appearances.

Salvation Army volunteer Tom Krieger started the Souper Bowl 21 years ago. The first one, he said, was just a product of luck.

“Our commander got a call from the corps in Knoxville that Drew Pearson, who was a former Dallas Cowboy, was in Knoxville to speak, and he was available the next day for free if we would come and get him, which we did. So we just invited some people, and he spoke.”

The next year, the Souper Bowl was almost canceled. There was a massive snowstorm that closed the Holiday Inn for a week and caused The Salvation Army to call off the event. However, luckily, the speaker, Archie Manning, was in a town about an hour away six weeks later, so it was able to be rescheduled then.

In the third year, the event evolved into what it is today, where The Salvation Army sells tables of eight to local businesses (like this year’s main sponsors Price Less IGA, Food City, Waste Management, Stifel, First Tennessee Bank, Citibank and Roadrunner Markets). Before that, there were just 10 to 15 tables present, but since then, there are regularly 40, which is their limit. Krieger said some sponsors have been with the event since this first sponsorship year.

Last year’s speaker was longtime Florida State University coach Bobby Bowden, who was the best received to date. Other popular past speakers have been Pearson, Ron Jaworski (who is now an NFL analyst on ESPN), Dwight Clark (famous for “The Catch,” which led the 49ers to their first Super Bowl trip), Gale Sayers (whose friendship with Chicago Bears teammate Brian Piccolo was the basis for the 1971 ABC Movie of the Week, “Brian’s Song”) and Bill Bates.

“Most of them have tried to work in something to do with The Salvation Army, their relationship or what they know about it,” Krieger said. “Bobby Bowden just had a really Christian message.”

The day of the event begins with a reception at the home of the East Tennessee State University president for gold- and silver-level sponsors. They get a photo with and autographed football from the speaker and have the chance for a short one-on-one with him. Then, he addresses the group and answers questions for about 15 minutes.

After that, the sponsors join the rest of the luncheon guests at the Holiday Inn, where they begin a lunch buffet at 11:15. Part of the time the guests are eating, the speaker has a short press conference with local media outlets; then, the program begins at noon.

There are brief introductory remarks, which include recognizing sponsors and acknowledging a table of veterans from The Salvation Army’s veterans’ transitional housing program for their service. The Salvation Army captain will say a few words, and then, the speaker is introduced.

He will speak for about a half hour, then take a few moments to answer questions. After that, a lucky winner at three tables (whose chair was marked with a paper football) will win a football that the speaker will sign.

To conclude the event, the speaker has an autograph signing in the hallway outside of the luncheon for about an hour. The Salvation Army provides photos he can sign and also has additional footballs that people can purchase for $25. Some guests will bring trading cards, helmets and jerseys to be signed.

Selling the footballs increases excitement; it’s also a way to earn a few hundred more dollars for the event. Another way The Salvation Army increases proceeds is by having large “Salvation Army” soup bowls on every table asking for donations of loose change and dollars. Last year, $2,003.91 was raised in bowl donations, part of the $30,000 netted for The Salvation Army’s feeding programs.

The footballs and donations are in addition to ticket and table sales. Tables are sold for just $300, making it only $37.50 per seat. Individuals can also purchase single seats for $40 each. Generally, the crowd averages 350 people.

“It’s a low-key, fun event, and everybody just seems to have a good time,” Krieger said. 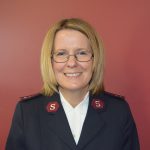 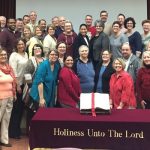