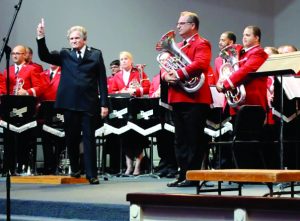 James Curnow was honored at his retirement as territorial music editor for the Southern Territory with a superb tribute concert at the Atlanta Temple Corps. It was fitting that the concert featured the Southern Territorial Band (Bandmaster Nick Simmons-Smith) and the Asbury University Salvation Army Student Fellowship Band and Songsters (Bandmaster Nathan Miller and Songster Leader Jeff Barrington).

As a professor of music at Asbury College in the 1970s and early 1980s, Curnow brought the Asbury SASF Band to a remarkable standard of music and ministry that culminated in outstanding performances at the 1980 National Congress in Kansas City. As a music editor, he was closely associated with the Southern Territorial Band as a frequent guest conductor, composer and bandsman.

Bandmaster William Himes, O.F., was the perfect concert chairman bringing his encyclopedic knowledge of SA banding and his humor to his commentary, reflecting his lifelong association with James Curnow.

The tribute concert celebrated Curnow’s leadership as territorial music editor in conceiving and developing the American Instrumental Ensemble Series (AIES) and the Sing Praise and Children’s Praise Choral Series. It was recognized that this tremendous body of music published annually beginning in 1987 is targeted to all corps bands, youth bands, songster brigades, youth choruses and singing companies.

The concert program included a wide gamut of Curnow compositions and arrangements beginning with “Jubilant Praise,” an exciting opener by the territorial band.

The SASF Band demonstrated that they are in capable hands under Bandmaster Nathan Miller’s baton with a solid performance of “Emblems” written for the Southern Territorial Band’s participation in the 1990 International Congress. B/M Himes introduced the emblems represented in the composition, visible symbols of The Salvation Army: the cross (“Near the Cross”), the flag (“Lift Up the Banner”), and the drum (the Army’s commitment to evangelism reflected in a bass drum solo).

Two outstanding Curnow marches, “Southern Spirit” and “Asburian,” were included, and a quintet was formed to play “I’ve Got Peace Like a River” as a representative Curnow composition from the more than 500 arrangements published in the American Instrumental Ensemble Series from 1987 to 2017.

Curnow conducted the SASF Band in his moving hymn tune meditation “He Giveth More Grace,” which was followed by the classic tone poem, “A Psalm of Praise.” The Massed Band finale, “Fanfare and Flourishes,” brought the audience of 300 to their feet in a sustained applause that reflected their high praise for Curnow’s incomparable contributions to Salvation Army music. 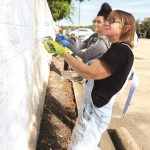 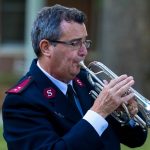 My Calling to Service Came with the Territory
Scroll to top