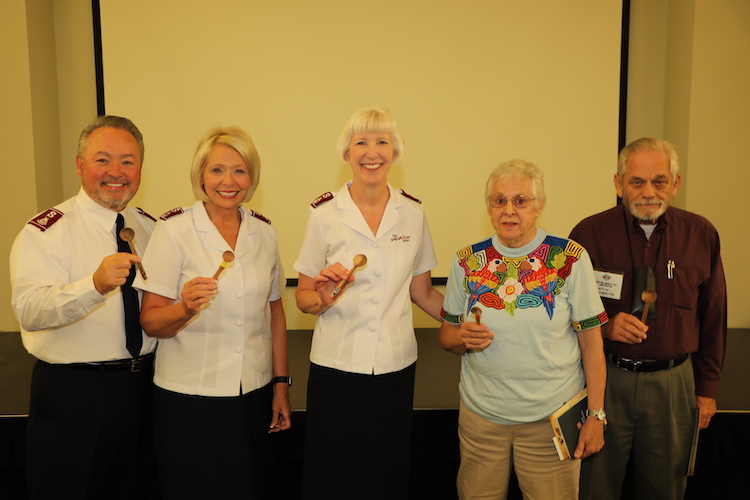 Program participants display wooden spoons given to attendees. Colonel Donna Igleheart explains the spoons as a reminder of her time in South Africa and of God’s grace and goodness.

The seventh International Service Fellowship Breakfast was held during the 2021 Southern Bible Conference, this year with guest speakers Colonels Kelly & Donna Igleheart. Colonels Igleheart shared what they called “paradoxical moments” from their years serving in the Southern Africa Territory.

By way of research, Major Evelyn Repass observed that the Southern Territory has over the decades provided officers and soldiers serving overseas in 54 countries, and that today’s attendees represent some 44 countries where they served. In the room that day, all five Army “Zones” were represented by personnel who served in those regions.

Colonels Donna and Kelly took turns describing moments, good and “hard,” of their time in the five countries comprising the Southern Africa Territory.

“Officers in that territory are the bravest I’ve ever met,” exclaimed Colonel Kelly. “Often the environment can be dangerous, Salvationists there bear scars both physically and emotionally from current conditions and those of the Apartheid era. Many women we knew suffered the loss of a child and yet, they only speak of the grace and goodness of God!”

The Iglehearts say they are convinced that a praying Salvation Army delivered them from experiencing any such incidents.

“Your prayers protected us. Our guardian angels worked overtime, by the grace of God.”

But there were many more victories and highlights than hard moments, they quickly followed. They told of one farmer owning some 2,000 acres, who contacted The Salvation Army to establish a small church and a clinic for the people living near him. The Salvation Army’s ministry there was so successful, the farmer gave the entire portion of land to the territory upon his death.

There were also countless times where God’s grace and faithfulness became evident in the thousands of lives and occasions where He is glorified.

Colonel Kelly closed his remarks by saying, “The Great Commandment bids us to go and make disciples. What we didn’t expect was that the people of the Southern Africa Territory would disciple us!”

Colonel Donna provided wooden spoons from Africa to all attendees, asking everyone to look at the spoons often to remember the Southern Africa Territory in prayer.

Colonel Donna Igleheart shares her experiences during the years serving in the Southern Africa Territory. 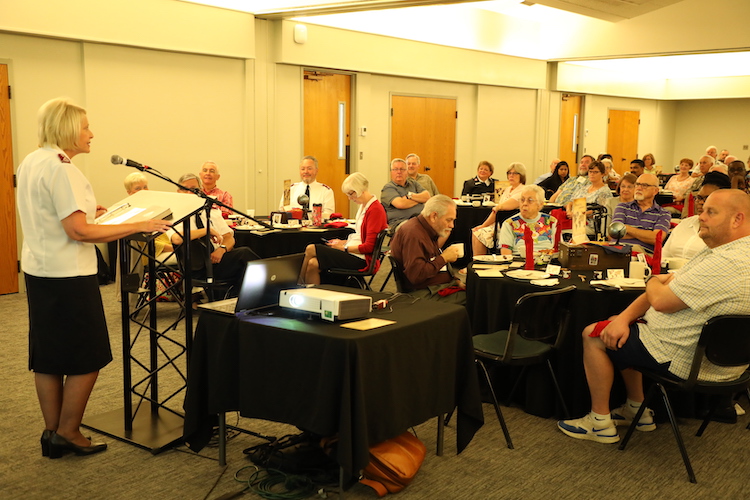 Commissioner Barbara Howell addresses those in the group who are experiencing a call to serve overseas. 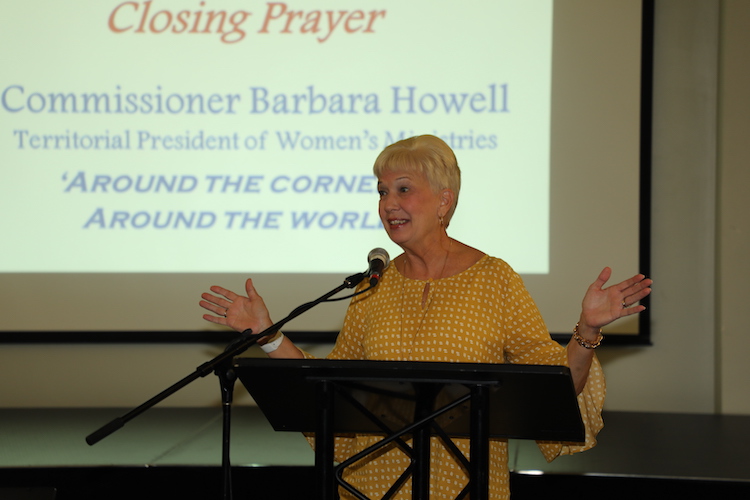 To Battle We Go: The Three General Orders 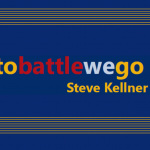 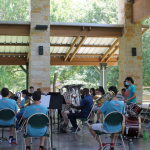