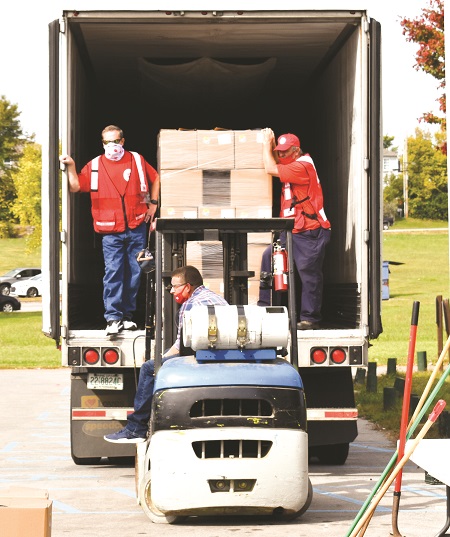 How a Kentucky corps handed out 1,200 food boxes in one day

A food logistics firm working with the USDA sought nonprofit partners to set up food distributions to households in need. The Salvation Army in Danville, Kentucky, took one look at the numbers and hesitated: 1,200 boxes, 30 pounds per box, 36,000 pounds of food total per site.

“I said no, initially, because I knew they had perishables and we have only one refrigerator,” said Lieutenant Lindsey Galabeas, corps officer in Danville along with her husband, Lieutenant Roger Galabras. But word came down from Kentucky-Tennessee Divisional Headquarters that a refrigerated truck would bring the food and remain on site.

So the corps said OK. It was soon working with the Mercer County Family Resource and Youth Service Centers, an entity affiliated with the local school district, on what would be, for a rural county with a population of 21,774, an unprecedented, record-breaking food distribution.

Perfect Pact USA delivered the food on behalf of the USDA Farmers to Families Food Box Program, for households impacted by the COVID-19 pandemic. Each box contained fruits, vegetables, pre-cooked meat, cheese, cultured dairy and milk that might have otherwise been sold to commercial entities.

Word of the food giveaway went out over social media, through radio interviews and in stories by local newspapers and TV stations.

“The need is great,” Lieutenant Lindsey said. “While we focused on families in Mercer County, we were not restricted to serving only those in the county, and I believe a lot of people came from all over our five-county service area.”

“All barriers were removed. We didn’t take any kind of paperwork or require any documentation. We did ask that only those who really needed food to come out, and for those who didn’t, to be respectful of those who did.”

The morning of Friday, Oct. 9, hundreds of vehicles lined up in the parking lot of a Harrodsburg, Kentucky, community park, and for a half-mile on a highway. Mercer County Sheriff’s deputies directed traffic. Twenty-five volunteers helped load food boxes into vehicles.

“At one point, we had 600 cars in line,” Lieutenant Lindsey said. “We started with one box for every two people in a household. When it became clear we wouldn’t be able to get to even half the cars in the parking lot, we adjusted. It ended up being one box per car. In the end, we served about 800 vehicles.”

Besides the satisfaction of helping others in need, corps members got to network with other community organizations.

Mercer Family Resources, for example, will work with the corps on its Angel Tree gift distribution this Christmas. Corps members also exchanged information with churches, and with case workers from social services agencies who were picking up boxes for families they counsel. And the corps reaffirmed its commitment to the community with local business owners.

Lieutenant Lindsey said, “You could tell that for businesses in the county, it meant a lot for them that The Salvation Army was being a beacon of hope for people in need.” 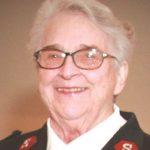 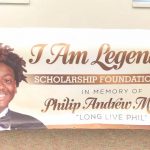