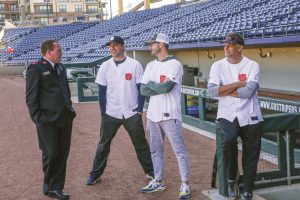 The Salvation Army of Gwinnett County, Georgia, planned to kick off the 2018 Christmas season with a home run derby at the home of the Gwinnett Stripers, a minor league affiliate of Major League Baseball’s Atlanta Braves. Due to weather issues for the outdoor event, the originally scheduled outing had to be put on hold but the 2019 edition, the first of its kind in Gwinnett, took place on Saturday, Nov. 2.

The event, held at Coolray Field, served as the official kettle kickoff for the region, with a trio of former Atlanta Braves players – Mark DeRosa, Mark Wohlers and Nick Green – on hand to serve as ambassadors and participants. The afternoon centered on the derby itself, with the former major leaguers joined by softball players from Brenau University and Buford High School to hit home runs to raise funding to help The Salvation Army.

Throughout the afternoon, entertainment options were plentiful, with activities for young children like face painting, a bouncy house and appearances from various characters and mascots. Abundant food options were also on display, with individuals able to bid on high-end sporting items in a silent auction and various giveaways for those in attendance. Also, musical groups from The Salvation Army performed, from the Lawrenceville Corps band and singing company to transMission, the Southern Territory’s contemporary worship ensemble.

“The event was certainly a success,” said Captain Jeremy Mockabee, commanding officer. “We achieved what we set out to do with the event, which was to raise money, raise awareness for the Gwinnett County Red Kettle Campaign and raise awareness of The Salvation Army of Gwinnett in general. The former MLB players had a great time and were happy to participate and appreciate all the work The Salvation Army does.”

Ultimately, more than $36,000 was raised with the help of corporate sponsorships from companies like UPS and CentiMark, with plans in the works to continue the event on an annual basis in 2020 and beyond. The funds gathered serve as a kick-start to the upcoming Christmas campaign, but the event was also beneficial from a public awareness perspective.

“Our goals for the event, from the purposeful and intentional effort to bring awareness of The Salvation Army in Gwinnett County to helping to launch our fundraising for Christmas, were achieved in a great way,” said Jeremy Rowland, territorial sergeant major and Lawrenceville corps sergeant major. “The derby also allowed us to help build partnerships for the future. We were able to inform and educate vendors and partners on our mission and why we do what we do. It also helped to create meaningful relationships that we can continue to grow.” 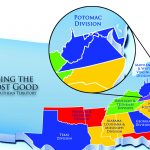 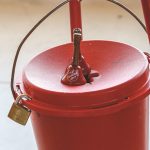