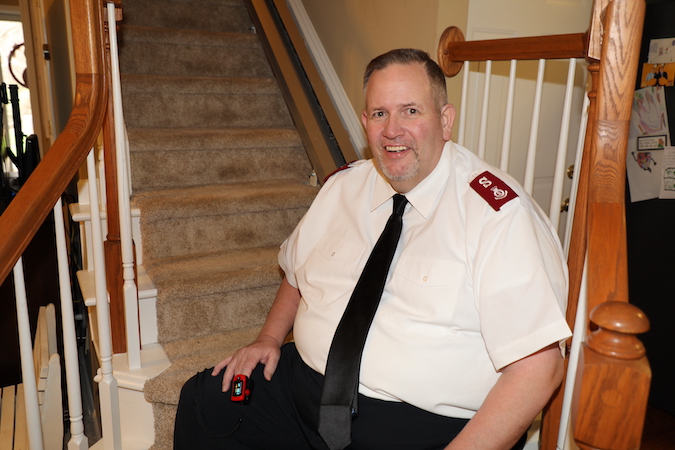 The stairway in Major Gary Sturdivant’s home became a personal rehab quest to negotiate after 63 days in the hospital due to COVID.

By his own admission, Major Gary Sturdivant should no longer be alive.

That is because less than 48 hours after being tested positive for COVID-19, Gary was in an ICU room and deemed “loss of life” by medical personnel. Only the grace and mercy of God, the love and devotion of his wife and three children, and the immense prayer vigil of Salvationists and friends in an estimated 40 countries saw him through.

“We both decided to get tested on Dec. 3 because I had lost my senses of smell and taste,” Gary explains. Majors Sturdivant are appointed to the staff of the North and South Carolina Division, and were also anxious not to spread the virus should they be contagious during upcoming Christmas activities.

“It turns out we both had it — me and Bessie (his affectionate nickname for his wife, Beth).” That was Thursday. On Friday, he told Beth he was feeling better, and that maybe this would not amount to much.

But then came Saturday, and with it, severe difficulty breathing.

“I was terrified,” Beth recalls. “We rushed him to the emergency room at a hospital in Matthews (NC).” The next day, Beth would also be taken to a Charlotte hospital with symptoms of her own, but not as severe. She would be released five days later.

Gary continues, “When I got to the (Matthews) hospital they put me in a wheelchair and that’s the last solid thing I remember for the next 30 days.”

Immediate tests showed Gary’s oxygen level at a critical 74%. His lungs and heart were shutting down, and pain stimulus tests proved minimal. Doctors determined he was “loss of life” — vernacular for imminent death.

Their son, Aaron, was three hours away. He was on the phone with his dad’s attending physician, and was told, “Your dad doesn’t have three hours.”

Gary had to be intubated and for a time seemed to stabilize. Only the “BPap” kept Gary alive. It is a type of ventilator — a device that helps with breathing. The lungs and heart had indeed stopped working, but hospital staff kept feverishly working only because there seemed a small level of brain activity.

“I was told later my pulmonologist and the nurses worked on me for 55 minutes to keep me alive,” Gary says, his eyes beginning to tear up. He also learned later that at the height of the near-death crisis, the BPap was pumping 90% of oxygen into Gary’s body — there was miniscule air left in his lungs.

Gary was soon transferred to Presbyterian Hospital in Charlotte, where he would continue in that ICU for the next four weeks. His wife and family agonized over not being able to visit him during that long stretch.

“I’m a big guy, and I’m told they had to restrain me because I sometimes fought (the nurses), and I wanted to get the tubes out,” he says.

In early January, the family was told that he would not “make it through the night.” But Gary did, and he totally gives glory and honor to God. In the first days after that dire warning, Gary seemed to begin turning the corner.

“I was moved out of the ICU to the intermediate floor, and it was during that time that I now remember bits and pieces.”

Everyone closest to Major Gary Sturdivant loves him for his keen sense of humor and his love for the Lord, his family, and people in general. As he was making slow progress, several of his reactions can be looked back upon as humorous. Now able to Facetime, Gary was convinced he was kidnapped, and pleaded with his family to call the FBI.

Weeks later, he was moved to a regular room and allowed one visitor at a time. Usually that was Beth, but she would often give that privilege to one of their sons and daughter. Eventually he was well enough for rehab, and recovery began to speed up until he could go home — some 63 days after that fateful Saturday. During those two months, Gary lost over 50 pounds.

“One of the questions I’m always asked is, if I saw Heaven,” Gary says. “I can’t say that I did, but I do remember seeing my mom and dad who are both now with the Lord. I was in a church somewhere and my mom and dad seemed to be hosting the event, serving everyone around them. They didn’t acknowledge my presence and no words were exchanged.”

In that encounter, Gary describes his dad as wearing a red and black shirt — probably representing the North Carolina State Wolfpack, their favorite college. He also wonders if why he was not able to speak to his parents was because he had not yet crossed over.

Gary still has an uphill climb in his recovery, but the prognosis is good. He must keep oxygen next to him, and his lungs are slowly healing. He ventures from home on a limited and careful basis — and he tires easily.

“I’m told that one day in the hospital is like three days in real time,” he says, “so it’s like I’ve been going through this for six months! My body is just exhausted.”

Emotionally, Gary does not call this “guilt,” but he does wonder why he was spared while other friends and Salvationists succumbed to this disease, particularly Rick Arrowood and Major Debbie Cope.

All who really know Major Gary Sturdivant must conclude that he will spend the rest of his life shouting out the good news of God’s love, mercy and grace shown to him especially throughout this crisis.

“My Heavenly Father chose to deliver me, and I don’t know why except that He knows I will praise the Lord Jesus from the rooftops to anyone who will listen!” 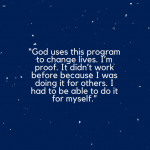 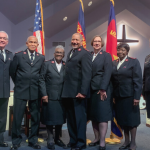