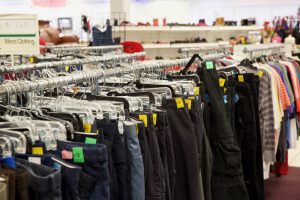 When Delta Air Lines introduced its new, Zac Posen-designed “Passport Plum” uniforms earlier this year, it was challenged  with disposing of more than 1 million pieces of clothing – the old uniforms of 64,000 employees. Not wishing to send hundreds of thousands of pounds of mostly serviceable apparel to a landfill, the airline contacted nonprofit organizations around the country.

An inquiry to The Salvation Army National Headquarters was referred to Eric Rader, in the marketing and communications department of the Adult Rehabilitation Centers Command at Southern Territorial Headquarters, Atlanta (Delta also is based in Atlanta).

“I told our contact at Delta about our program at the Atlanta ARC and encouraged her to take a tour with her team,” Rader said. “Afterwards, she said it was the most incredible thing she’d ever seen. She talked to her other colleagues, and they decided to give the bulk of the donation to The Salvation Army.”

In September, a Southern Territory ARC truck picked up 26 pallets of clothing from Delta. The Army’s Western Territory, meanwhile, was promised more than 20 pallets in Portland, Oregon, the airline’s western repository of retired uniforms.

They’ll be sold in Salvation Army Family Stores, with the proceeds supporting ARC’s efforts to help individuals struggling with drug and alcohol dependence; the program offers a 6- to 12-month, faith-based rehabilitation program.

Delta badges, epaulets and other emblems have been removed. Navy blue is the predominant color for men’s jackets, women’s skirts and men’s and women’s dress slacks. Other items include ties, dress shirts and durable work clothes like the overcoats, shorts and pants worn by crews on the tarmac. Prices are a very affordable $2.99 for men’s shorts and $3.99 for men’s dress slacks, to name two items.

“It’s really going to help make a difference and help a lot of people,” said Major Michael Vincent, Atlanta ARC administrator. The gift will be distributed among our stores in the Atlanta area, “where we’re putting them out 200 at a time.”

As they do with every donation, Family Store workers first sorted the items, discarding those too worn for re-sale and tagging and hanging the rest for store display. “Some of the pants are so new, they still have the crease in them,” Rader said.

Articles that could not be donated because Delta branding is woven into them – including the airline’s signature red flight attendants’ dresses – went to Looptworks, a Portland, Oregon-based fabric recycler that will “upcycle” the goods into new products such as backpacks, passport covers and other bags and accessories. They’ll be available for purchase this fall.

“It is an incredible gift,” Major Vincent said. “Just to have the interest of Delta is wonderful. I’m hoping that as time goes on, we’ll be considered for other donations that we can put to use to help the folks in the community.” 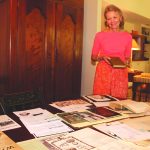 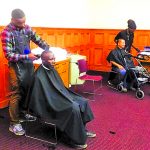