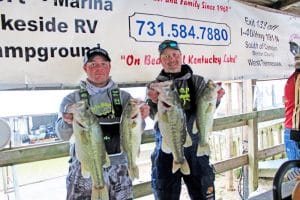 Fishers of men, fishermen link up at corps bass tourney

The rules for a recent fundraiser of The Salvation Army corps in Jackson, Tennessee, were straightforward: Head out onto the water at dawn and bring back no more than five fish by 3 p.m.

All had to be largemouth, smallmouth or Kentucky spotted bass, at least 15 inches long, and alive – no ringers from the freezer to try to slip by the judges. And while the 2nd Annual Red Shield Bass Tournament was going, Salvationists had a chance to serve food and witness to the fishermen.

Fishing and the gospel: There’s a precedent.

“As far as the fishing goes, it went really well,” said Lieutenant David Moynihan. As for the weather – not so much. “It rained really hard and brought the fishermen in, and while they were eating, it gave us an opportunity to speak with them.”

Lieutenants David and Cheryl Moynihan arrived as corps officers in Jackson last June. The first tournament, on nearby Kentucky Lake of the Tennessee River, had been tried by their predecessor officers that spring.

“We looked into it because we’re always looking for new ways to raise money,” Lieutenant Cheryl said. This year’s tourney, she said, “was good PR and give us an appearance in a whole other realm, with fishermen.”

Bass fishing has a professional association, the Bass Anglers Sportsman Society, founded in 1968 and whose website today boasts of half a million members.

B.A.S.S. sponsors a “Bassmaster Tournament Trail,” similar to the PGA Tour except for the fishy crowd. Gear Patrol magazine says bass fishing, “along with lacrosse and volleyball, is one of the fastest-growing collegiate club sports in the country” – and a potentially lucrative one, given the cash prizes awarded by the ever-growing number of tournaments.

“Like a freight train out of control, there seems to be no stopping the popularity of bass fishing tournaments within the USA,” says the fishing website Line & Sight.

The Jackson Corps’ two fishing meets were organized by Brad Smith, a member of the Madison County, Tennessee, Bass Anglers, and a man with a knack for putting together tournaments.

The corps approached the fishing club last year with the idea for its own contest, and Smith and his family volunteered to help.

“This is for charity, and I just felt like it was theright thing to do,” Smith said. “Second, one of our bylaws is to work with the community and help with community-type events.”

Two-person teams in about 30 boats paid aregistration fee of $100 per boat. On tournament day, the Army started setting up at 4:30 a.m. at the Birdsong Marina & Resort in Camden. Contestants put their boats in the water and took off around 6 a.m.

The Salvation Army got the gate receipts after the prizes. Proceeds from a raffle of donated items – restaurant and sporting goods gift cards, fishing rods and reels, and other outdoor gear – went to the Bass Anglers. Birdsong Marina owner Bob Keast provided support, and the Benton County, Tennessee, Chamber of Commerce donated $1,000 for prize monies.

Best of all, Lieutenants Moynihan and their crew of Salvationists spent the day with people they otherwise might never have met.

“We were able to pray with the fishermen; I gave a devotional as they went out,” Lieutenant David said. “We had our canteen and disaster team there to serve food. I also got to spend a lot of time talking and witnessing to the fishermen while their fish were being weighed.”

“So it was a way to bring the corps together full force, and a good way for a new lieutenant to get to know the guys better.”

Plans for next year are still up in the air, the lieutenant said, “but Brad is confident we can get close to 100 boats.”