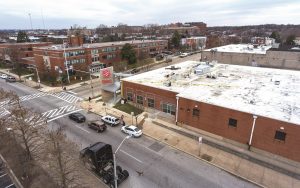 When The Salvation Army Central Maryland Area Command opened DMG Foods (as in “Doing the Most Good”) in northeast Baltimore one year ago this month – on March 7, 2018 – its founders knew they were sailing into the unknown.

Though they had experienced partners advising them – the Baltimore Development Corp., Baltimore Food Initiative, Maryland Food Bank and C&S Wholesale Grocers – “it was a lot harder than we anticipated,” said Major Gene Hogg, area commander. “It’s a business with a lot of different moving parts, unlike a corps or a nonprofit.”

Yet despite the challenges – the store is making progress but is not yet turning a profit – there’s the satisfaction knowing DMG Foods is fulfilling its mission of providing fresh, healthy nutrition at affordable prices in a “food desert.” Two-thirds of area residents don’t have cars, and it’s a long walk to a conventional supermarket.

The 7,000-square-foot store at 400 E. 29th St. represents a $2.2 million investment in the neighborhood. It offers fresh fruits and vegetables, meat cut on-site and other quality foods like whole grains and low-fat milk.

“The community greatly benefits,” Major Hogg said. “We discovered you can take a business model and apply ministry principles to it. It’s provided a great platform to meet our community, engage with them, pray with them and tell them about The Salvation Army.”

Since its opening, DMG Foods also has inquiries from people out-of-town – calling, messaging and, often, visiting – curious to see if the non-profit grocery concept might work in their own cities. Major Hogg said, “We recently hosted a group from the mayor’s office of Baton Rouge (Louisiana). We see groups almost on a weekly basis from all over the country.”

“I’ve talked to people all over the world and in every state of the Union. A great many communities, especially large metropolitan areas, are trying to deal with food deserts. For-profit grocery stores – it’s a high-volume, low-profit business – just aren’t coming to those areas, or they’re leaving them.”

Amy Middleton, resource development manager for the Central Maryland Command, said DMG Foods “is still a bit of a work in progress, but it’s slowly achieving its goals.”

“Our mission is to reach an area that’s called a food insufficiency zone, to reach people who are using food stamps and maybe help them stretch their diet a little further, and to provide proteins like chicken at no cost to them,” Middleton said. “With that as a measurement of success, we’re definitely hitting that.”

Among the lessons – putting the big red shield out front brands DMG Foods as a Salvation Army operation, and many residents assume it’s a soup kitchen or thrift store. “But as people come in, the word is spreading. That’s how things work in Baltimore; word of mouth is your best advertisement,” Middleton said.

Another lesson, she said: DMG Foods is a grocery store, yet one should view it as a program – “to look at it through Salvation Army eyes and say, we’re here to serve, not necessarily turn a profit. If there were grocery stores and chains that could make a profit in this neighborhood, they’d be here already.”

As a program, Middleton said, “we’re spending a lot less on this store than on a lot of other feeding programs we provide, such as food pantries and soup kitchens – what we call ‘complimentary cafes’ like the Brass Hat and Cornbread.”

Between $2,000 and $3,000 in gross daily sales would sustain the program. While the store is still working toward that level of sufficiency, Middleton said, “it serves a whole other purpose. We can reduce the cost of ordering goods and food, remove anything that’s going to spoil, any fruit or vegetable that’s not that great looking, any meat that doesn’t sell within a day or two, and send them to our other feeding programs.”

Other ways of measuring progress include DMG Foods’ “Red Shield Club” loyalty card, which shoppers can use to take advantage of special offers and discounts. So far, more than 3,000 people have signed up to be members, according to Eric Mueck, regional resource development director for the Central Maryland Command. “We’re well on pace to where we want to be,” he said.

Major Hogg said one goal is “to grow at least 10 percent every year over the next three years.” It’s a matter of changing people’s shopping habits – getting out the word, for example, “that we have the cheapest milk in Baltimore City,” $2.30 to $2.49 a gallon compared with as much as $6 a gallon at other retail outlets.

To reach residents, the store runs a social media campaign, sends out email blasts advertising daily specials, distributes printed circulars around the neighborhood, offers giveaways like 500 pounds of free chicken every week, and works with the Maryland Food Bank to promote daily meal solutions and cooking demonstrations for customers. It’s entertaining a marketing proposal from The Richards Group, and this year will launch a fundraising drive to create an endowment.

Most importantly, DMG Foods helps The Salvation Army in its WHY mission of helping people spiritually and reaching them with the gospel.

“A couple of times, the national commander has been with us, and he asks me the same question: What is your ministry?” Major Hogg said. “I turned to a couple in the check-out line and asked, ‘How are you doing? Is there anything we could pray with you about?’

“The wife started crying. She said her husband tried to commit suicide three months ago, he was in the hospital, and the medications they gave him really messed with his mind. She said, ‘We’re better now, but during his illness, we just lost everything. We used to be music ministers in a church, and we came to buy groceries.’ … She asked if we could pray for her husband to continue to heal and that they could find jobs. So we joined hands and prayed.”

“We have an LGBTQ community, and a young couple came in. Same thing – I asked a young man if there was anything I could pray for him about. He said, ‘Would you? My father is on dialysis at Johns Hopkins and we don’t know how long he has to live.’ We stood there in the store, held hands and prayed.”

Answering spiritual needs happens every day in the store, Major Hogg said. “We’re meeting physical needs and nutritional needs, we’re offering work readiness programs, and we have the opportunity to engage a community with an evangelistic outreach, to show people we are more than a social service agency, that we really are concerned about the spiritual life of the community.” 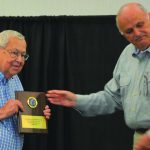 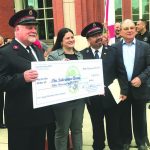 The Salvation Army, local officials will partner in central Florida
Scroll to top