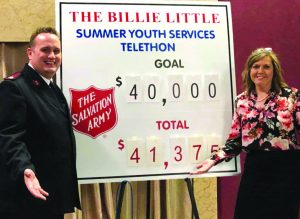 Dalton, Ga., goes all out to support Army camps

A live two-hour telethon on a local TV station, a dozen volunteers manning the phones and lots of communication and social media buzz in the days before and after the event generated more than $45,500 in pledges for the summer camp programs of a Salvation Army corps in North Georgia.

“It’s incredible,” said corps officer Major Doug McClure in Dalton. “Once again, we achieve a higher number than we did in the past. And honestly, we’ve had more donations rolling in since the telethon.”

The Dalton Corps worked with WDNN TV on the Billie Little Summer Youth Services Telethon – named for a longtime advisory board member who has led the fundraiser over its 22-year span.

The pitch of the Tuesday, April 17 event was to donate money to send children to the Dalton Corps’ six-week summer day camp program, and to Camp Grandview, the Georgia Division’s overnight camp in nearby Jasper. The goal was $40,000. The actual giving blew past that quickly.

“The crazy thing is, these are pledges, and 93 to 94 percent of them are filled,” Major McClure said. “Anybody in fundraising will tell you that to get that kind of response rate with a telethon is pretty darned good.”

Corps Business Manager Patricia Thompson said, “We sent out a pre letter saying the telethon was coming up, and if people wanted to mail in their donation, they could. Then, the night of the telethon, the advisory board manned the phones and also did a lot of calling out.”

“We always say, the more money that’s given, the more kids get to go to camp.”

Children attend camp at no charge to their families. About 48 attended the Dalton day camp and 25 went to Camp Grandview last year.

Besides giving youngsters the opportunity to stay active and safe, enjoy being outdoors and going on field trips, and grow spiritually over the summer, the children’s camps are a community outreach. They brought four to five new families to the corps last year, Major McClure said. 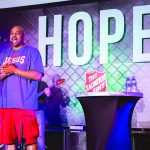 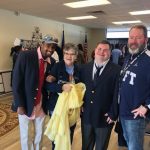