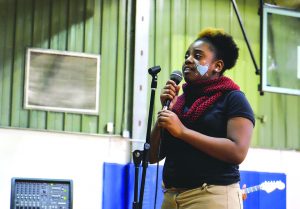 Good food, fun counselors and the experience to try new things are what make camp memorable for children like Jahnae. The first summer, being a girl from the Nashville, Tennessee, area, she didn’t really think Camp Paradise Valley on Dale Hollow Lake would be something she would like, but she decided to give it a try.

Jahnae signed up for the outdoor path at Paradise Valley, the overnight camp of the Kentucky-Tennessee Division, and soon realized that it wasn’t at all what she expected.

Having to catch frogs and learn about their life cycle and ecosystem – gross! But at the same time, that path introduced her to something she loved: archery. She was able pass along to her young cousin what she learned when he received a toy bow and arrow set as a gift.

During day camp, Jahnae was introduced to writing and singing songs. Having never been exposed to live music, she had no idea the gift that God had given her was just waiting inside to burst free.

The Red Shield Band was started in the fall of 2015, and Jahnae was chosen as its lead vocalist, thanks to her camp experiences. However, she did not stop with just that. She used her voice as a spring board to a better education, being accepted to I.T. Crestwell Arts Magnet School.

Her gift has also enabled her to do something many of her friends could only dream about: travel. In the summer of 2017, she traveled to Chicago to a music camp that also gave her the chance to perform with From the Hearts with Keny Fraize. This summer, she’ll be a world traveler, with her voice leading the way to a trip to Africa.

The most important thing to come from her camp experience was what the staff taught her about herself. “They taught me I shouldn’t be afraid of what I believe in, and that I am going to be a successful person,” Jahnae said.

Misty Ratcliffe is the volunteer coordinator for the Nashville Area Command.

— Adapted from “Behind the Shield,” blog of the Nashville, Tennessee, Metropolitan Area Command, April 11, 2018 —

Police partner with The Salvation Army in outreach to Maryland youth 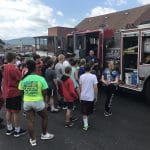 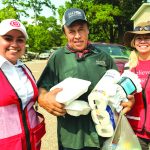