Cadets from the Evangeline Booth College have partnered with the Ray and Joan Kroc Corps Community Center in Atlanta to develop a community garden in an empty lot adjacent to the center. The garden, which will open next spring, will support existing and new programs and feed members of the surrounding Pittsburgh community for years to come.

Named the Rehoboth Community Garden, the project came out of a desire to involve cadets in practical ministry in their community through the Kroc center located next door to the campus.

When Lieutenants Antwann and Bethany Yocum were appointed to the Kroc center and Lieutenant Joe Mercier, their session mate, was appointed to EBC in June 2015, Major Dean Hinson, EBC principal, saw an opportunity for collaboration.

“Major Hinson wanted the school and the Kroc to come together and figure out a way for the cadets to be involved in the Kroc Center with transforming the community,” Lieutenant Mercier said. “He didn’t initially know what that would look like, but he had seen how students at Trevecca Nazarene University were using a community garden to impact their community, and he had the same picture for us.”

The idea was put on hold as all three officers settled into their positions until Lieutenant Antwann attended a meeting of Atlanta area pastors and asked what else The Salvation Army could be doing for the community.

“He was told that they would love if The Salvation Army could bring a community garden to the neighborhood,” Lieutenant Mercier said. “So, Lieutenant Yocum said, ‘it’s about time to bring this vision to life.’”

EBC created a new practicum class called Community Cultivation. Currently the class focuses on the establishment, funding and running of the Kroc center’s community garden, but the class will continue long after the garden is up and running and will focus on other projects, allowing the cadets to practice ministry that benefits their neighborhood in partnership with their local corps.

Each semester, a different group of six second-year cadets will be enrolled in the course. Cadet Wayne Meads, Jr., was one of the first group of six to begin working on the establishment of the garden earlier this fall.

“The greatest thing was the response from the community,” Cadet Meads said. “The people in this neighborhood are really excited and want to partake in it.”

The team of six focused on advertising, funding and research to establish the groundwork for the future garden. They met with leaders from other community gardens around Atlanta to understand how they got started and how they maintain their plots.

“This is really a way to uplift the community and give them something to be proud of,” Cadet Meads said.

The project has also been a way for the cadets to put their leadership and administration skills to the test by handling logistics, research and decision-making on their own, with limited supervision from both Lieutenants Yocum and Mercier.

“That’s the biggest impact for the cadets, that they are taking ownership and leadership of this project,” Lieutenant Mercier said. “They are having to make decisions and the decisions they make are going to impact the future.”

Groundbreaking on Rehoboth Community Garden is set for early February with plots opening up in time for spring. 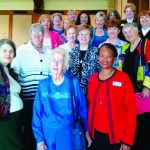