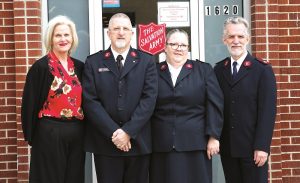 Brunswick, Georgia, gets a little help from friends as shelter is upgraded

For Captains Chris and Billie Powell, their posting so far in Brunswick, Georgia, has been one adventure after another. When they arrived in June, a much-needed renovation of The Salvation Army’s corps homeless shelter was about to begin. Then, the shelter’s plumbing failed. Then, Hurricane Irma hit.

The corps weathered the storm. The pipes were a bigger challenge.

“We had to completely replace the plumbing,” Captain Chris said. “If you go back and look at the history of flooding and hurricanes in Brunswick, this building is over 70 years old, and the original plumbing was still in it.

“It failed right as we were getting ready to start the renovations that had been approved before we got here. As my Dad used to say, we had to go back and punt the football.”

They didn’t have to punt very far; an anonymous donor stepped up to write a $30,000 check to pay for a new plumbing system, and then some. Thanks to the generosity of the Army’s partners in Brunswick and the trust fund at territorial headquarters, after six months’ work, the corps on March 5 had a re-opening ceremony for the shelter at 1620 Reynolds St.

The facility had been emptied for the renovation. With the work done, it’s expected to fill up quickly. “For about 120 miles around, there really isn’t another homeless shelter. We are it,” Captain Chris said.

Tasks included upgrading the men’s and women’s bathrooms to make them ADA compliant; expanding the women’s dormitory to 10 beds from six (capacity remains 16 beds on the men’s side); installing a laundry room with three new commercial washers and dryers; replacing the heating and air conditioning unit and their ductwork; putting in new electrical wiring; and trimming trees.

Brunswick is a community of about 16,000 on Georgia’s southeast coast. Its Salvation Army shelter was for men only up to about five to 10 years ago; then, space was set aside for women. “Now, there’s definitely a women’s dorm; before it was almost a closet, it was so small,” Captain Chris said.

There’s still no provision for families with children; that’s for a hoped-for future expansion.

Besides the anonymous donor, Captains Powell are grateful for the Terry Thomas Foundation, a local nonprofit that contributed money for beds, mattresses and pillows; the foundation previously had bought the new washers and dryers, which were put in storage until the renovation was completed.

The Powells also thank the First Baptist Church of Brunswick and its Kingdom Endowment, which paid for new lockers; St. Simons Community Church, which donated funds and in-kind gifts of linens, comforters and blankets; and St. Simons United Methodist Church, which provided towels, washcloths and soap.

“We have some great partners and a great community that really helped us get the shelter back open,” Captain Chris said. 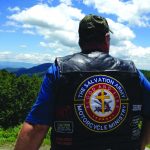 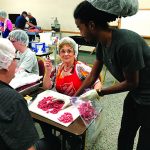 Clearwater Corps is all about World Services
Scroll to top