Augusta Bikers Join the Fight to Beat the Heat

Motorcycle enthusiasts in the Augusta, Georgia, area made a cool ride recently for a worthy cause. They transported $1,300 worth of new electric fans to the city’s Salvation Army Center of Hope to help needy folks survive the coming summer.

Average daily temperatures in the Augusta region soar into the 90s from June through September – uncomfortable for those without access to cooling and, for seniors, infants and people with chronic medical conditions, potentially deadly. Extreme heat kills more people than hurricanes, floods, tornadoes and lightning combined, the National Weather Service says.

The Fan Ride is organized by the Augusta Biker Coalition, an organization of seven to nine local clubs including a couple of Christian clubs.

“A lot of us got together and wanted to give back to the community,” said the club’s assistant treasurer and spokesman, a man who goes by the name “Tick Tock” as well as Ryan. “We did some research and found out The Salvation Army was one of the charity organizations that gives the most back – more bang for your buck, so to speak.

“Everybody does toy runs, and of course we do, too, for The Salvation Army in the winter. We hadn’t seen [a fan run] anywhere else. We got the idea that with these box fans, we could get them at fair price and give them to families that don’t have central air conditioning.”

The event is a charity ride; the entry fee is a donation of either $20 or a fan.

About 50 bikers saddled up April 15 at the Wal-Mart store in Grovetown, Georgia, for the 15-mile ride to the Center of Hope. John Sebby, the Augusta command’s director of development, said the bikers bought out the Wal-Mart’s stock of fans – 81 were purchased – and loaded them into a motorcycle trailer.

At their destination, Captain Canning greeted them with words of welcome and thanks. The riders formed a line to unload the fans, passing them from person to person and stacking them in a conference room of the center. “In the late spring and early summer, we’ll give the fans to families and seniors who don’t have air conditioning, to help them beat the heat,” Sebby said.

Tick Tock said, “We figured that was the best way to give back to the community and do something different.” 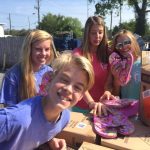