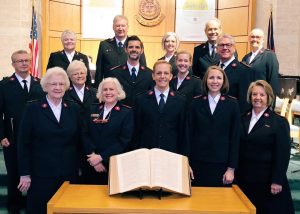 After 125 years of service, The Salvation Army ‘gets started’ in Tampa

The Salvation Army has been prominent in Tampa, Florida, for 125 years and, in mid-October, people from generations past and present gathered in the city to commemorate a memorable anniversary with a forward-facing message. With a full slate of activities, the weekend was presented with a theme of “Just Getting Started” and, from moment one, Captains Andy and Abby Miller were clear in emphasizing that the work of the Army is not finished.

Captain Andy, in speaking during the closing Homecoming meeting on Sunday morning, referenced the fact that “early Christianity was not a rememberence of pentecost, but a realization of it.” In taking that look back, he vigorously stated that “I believe that if God could do it then, he can do it again.”

The weekend began with a festival of music at the Tampa Corps on Friday evening, with the Southern Territorial Band featured as guests for the full weekend. The ensemble, led by Nicholas Simmons-Smith, territorial music secretary, delighted those in attendance with several selections, including compositions by bandsmen Andrew Barrington, Joel Collier and Steve Kellner, with soloist work from guest Mark Ridenour.

Kellner, who referenced a lengthy family heritage in the area, penned a march titled “Greater Things” to commemorate the occasion, with a massed band including present-day soldiers of the Tampa Corps presenting the musical number on Sunday morning.

Beyond that, the band was featured in ministry outside the walls of the corps. It performed concerts at a local mixed-use facility during a lunch hour and, with the help of corps youth from the area as soloists, in advance of a concert from the Florida Orchestra at Vinoy Park on Saturday afternoon. The band again accompanied Ridenour, formerly a soldier and bandsman at the Tampa Corps and now the assistant principal trumpet player of the Chicago Symphony Orchestra.

Ridenour’s presence during the weekend was fitting, in that many former soldiers and officers of the corps also returned. Previous corps officers gathered for a dramatic choral reading on Sunday morning, and that presentation also served as a reminder of unity and cohesion for the future.

Lt. Colonel William Mockabee, territorial program secretary and executive officer of the Southern Territorial Band, spoke inspiringly on Friday evening, setting the stage and centering the focus back to the cross. In response to an original composition by Simmons-Smith focusing on hope for the future, Lt. Colonel Mockabee shared his thoughts.

“There will be God,” he said. “What else needs to be said? That says it all. There will be God … We are hope. We are Christ. We are Jesus to people. And if there is ever a time when the world needs Christ, it is now.”

Though the overarching theme that there is more work to be done is undeniable, the weekend of commemoration appropriately finished on a high note. A celebratory tone was struck with the presence of the massed band in bringing the congregation to its feet in the final moments but, just earlier on Sunday morning, words to the popular contemporary worship song “You Are Good” left those in attendance with a takeaway to remember.

“People from every nation and tongue,” the song says. “From generation to generation, we worship you.” 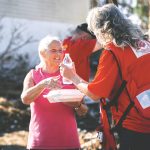 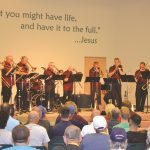 Men of Florida Division gather for reawakening
Scroll to top