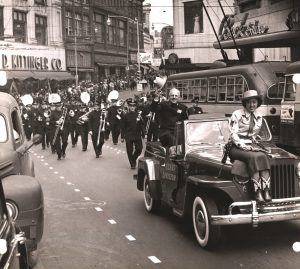 A peculiar way of music

Joe Johnson made a life-altering decision as a 12-year-old taking up the trumpet in his hometown of Needham, Massachusetts. Some Salvationist relatives suggested he might like summer music camp, and he said, sure.

So off he went to a Salvation Army conservatory – Ronald W. Holz, then divisional music director for Massachusetts, helped find Johnson a spot. And that’s where young Joe first encountered the British style of playing.

“I really love the brass band medium,” said Johnson, now purchasing and service operations manager in the Trade Department at Southern Territorial Headquarters in Atlanta, Georgia. In a British brass band – The Salvation Army’s signature instrumental ensemble – “you learn things about technique and ensemble playing I did not learn in school.”

That’s saying a lot. Johnson majored in music at Boston University and graduated with degrees in trumpet performance and music education. “It’s a totally different style of music and of playing.” Those who grew up with cornets and tenor horns might not realize these instruments and certain practices make the Army way of music – well, a little peculiar to Americans familiar with the trumpets and French horns of school marching bands and community wind ensembles.

It’s all determinedly English. While brass bands have been popular in the U.K. since the late Victorian era, The Salvation Army for much of the 20th century was the last outpost of British banding in the United States. Yet in the 21st century, the Army fits right in with a brass band revival in the States.

The University of Georgia British Brass Band, for example, will perform in concert April 6 at Atlanta Temple Corps as part of the World Missions Conference.

That ensemble began in August 2014 with the appointment of Philip Smith as Prokasy Professor in the Arts to the trumpet faculty at the Athens, Georgia, university. Smith was principal trumpeter for the New York Philharmonic for 36 years and has long been involved with Salvation Army music.

Other examples include the Georgia Brass Band, founded in 1999 by Johnson and Christopher Priest, territorial director of communications. A 2016 academic paper identified as many as 23 U.S. colleges and universities offering curricular or extra-curricular British brass bands.

The North American Brass Band Association, founded in 1983 to support the British-style brass band movement, holds an annual competition where some of the finest bands on the continent compete. Last year, the UGA British Brass Band placed third in the First Section of the contest. This year’s meet is April 5-7 in Fort Wayne, Indiana. (The Georgia Brass Band has won two section titles.)

According to Holz’ “Brass Bands of the Salvation Army: Their Mission and Music, Volume I” (2006, Streets Publishers, Hertfordshire, England), the Orders and Regulations say bands have three functions: Attract people to meetings, particularly open airs; accompany, help and enrich the singing; and convey, through the wise choice of tunes or selections, “salvation messages direct to the hearts of the hearers.”

The Army’s formative years in Great Britain coincided with the rise of community, coal mine and factory bands throughout the country, with an estimated 40,000 amateur ensembles in the British Isles in 1889 and more than 200 band contests held every year by the turn of the 20th century. The number of bands today is perhaps one-tenth of the movement at its peak, but the competitive spirit of banding remains strong and band contests, popular.

Every Salvation Army musician has likely heard how Charles William Fry and his sons in 1878 brought their four-member band to early meetings of William Booth’s Christian Mission in Salisbury, England, and how General Booth came to embrace the brass band as a tool for evangelistic outreach.

“The big plus of a band was, it was a church organ you could take to the streets,” Priest said. While a teenager in England, he said, “our band would march to a little subdivision or shopping center, we would play, someone would read Scripture and pray, and we’d march back to our hall.” 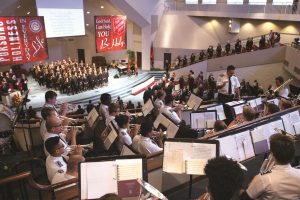 Nicholas Simmons-Smith, territorial music and creative arts education secretary, said, “The British brass band is what Salvation Army bands around the world are based on – whether in Zimbabwe, India, Germany, America or Canada. They came in with the start of our movement. The most popular music of the day in England would have been brass band music.”

Yet outside the Army, by the early 20th century, American and British bandsmen were moving apart. Credit, or blame, goes to possibly the greatest band leader in America, ever.

“Bands had been popular in the United States from around the time of the Civil War, and we used in America a slightly different combination of instruments,” Simmons-Smith said. “Then John Philip Sousa came along and revolutionized the American-style marching band, including flutes, clarinets and saxophones.” (What would “The Stars and Stripes Forever” be without the piccolos?)

“At that point, things diverged. America embraced the symphonic wind ensemble, and Britain stayed with the brass band.”

There are some obvious differences. Americans like straight-bore trumpets – loud, bright and brassy. Brits prefer conical-bore cornets with their soft, smooth, mellow tones. Simmons-Smith describes the latter as “sweet, rich, lyrical … soothing to the soul.”

“We believe – and we know it to be true – the Holy Spirit uses these sensitive moments, the mellow, rich, sonorous sound of a brass band, to inspire people.”

Holz wrote that The Salvation Army “developed a rich, artistically and spiritually consistent repertoire for its brass bands. That achievement can be considered one of the major achievements within Protestant instrumental music of the last two centuries.” 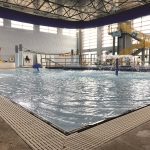 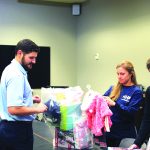